I've had a short think about the name for this new regiment, and eventually came up with.........

141st Elysian Drop Troop Regiment "Helljumpers"
Not quite the memorable name i was going for, but i ran out of ideas! Some of you may notice the inspiration taken from Halo in there!
I also put some thought into the colours for my regiment. From the start i wanted a desert camo scheme for the army. After trawling the net for ideas, i came accross an article about the Taros Campaign from IA3, where the Elysians made their first appearance. They showed a picture of the scheme used in that campaign, and i liked it instantly! Having never read IA3, the scheme was new to me, and fullfilled my criteria perfectly!
Below is a quick outline of the scheme (those of you who have read IA3 will already be fimiliar with it) I found this healpful Elysian sketch on Google Images!! 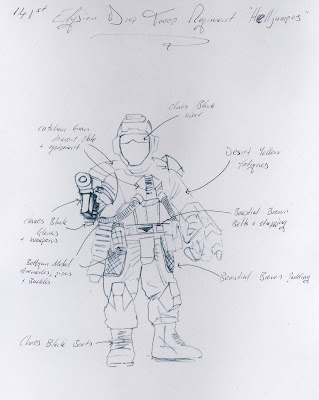 This of course will be subject to change and adaptation, so i'll need to do a test model first to see how it really looks.  Shading, washes and highlighting will be figured out as i go along, but for now this is the intended scheme.
With regard to armour, i was going to go for a very straight forward Desert Yellow basecoat with some rust coloured feathering over the hull. Minimal metalic detail will be added (as it'll spoil the camoflage needed in this desert theatre!). Again, im sure this'll change over time.
Right, better get ordering off Forgeworld, and get some test models knocked out!
at June 07, 2010