Well I rushed out and quizzed the local DIY store on the best way to glue a Reaver Titan back together at around 0800, and have been working on repairs since!
The guy in the store recommended Araldite, a two part contact adhesive. It reeks to place out, but it gets the job done! To well in fact, when i realise I'd glued the hips back to front!! There is a larger armour plate that's meant to be at the front, which i found on the floor after I'd finished sticking the thing back together! I may be able to prise off the smaller plate and swap them around, but I'm all Reaver'd out for today! 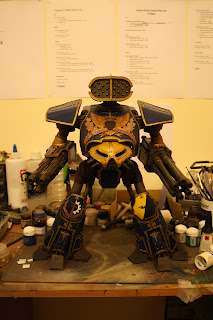 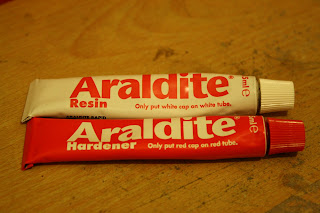 Now the matter of re-painting; well, I've opted out of a full repaint because i simply cant be arsed! Now, as the blue and the gold are both custom colours which i can no longer replicate, I'm going to have a job finding something to match. I did play around with a few combos today, and i think i have the right colours for the job. Luckily its just chipping i have to deal with and not full blown repainting, so hopefully any inconsistencies wont be to noticable. I'll get started on that tomorrow.
at October 15, 2010

Email ThisBlogThis!Share to TwitterShare to FacebookShare to Pinterest
Labels: Titans