Once i saw all that terrain come together in the Apocalypse game at the weekend, i went a bit terrain mad again! I'm in a similar mode to when i was building the Cathedral - build, build, build, with all painting on hold!

The day after the game i immediately set about planing the Hab Block! A 2.5ft long and 1.5ft high building with plenty of floor space for my Long Fangs to occupy!

Here's where i am at the moment. If you can make it out in all that mess! 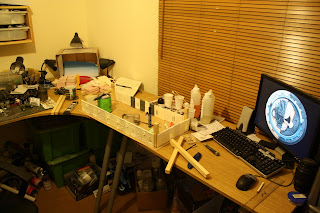 The first level is stuck down to  the base, supported by wooden pillars in the corners for stability. 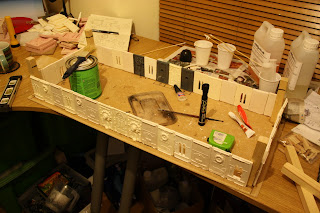 Here's a scale shot with an Elysian in the center! The 'wings' of the Hab will be 2 panels high, while the central tower block will be 5 panels high. The whole structure will run 6 panels deep. 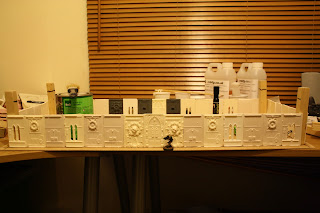 My random scrawling to give you an idea of what im aiming for. 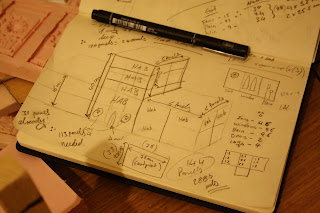 When i moved the base off the desk to let it all dry, i was a bit worried that the base was a bit bendy. There was some ominous creaking as i set it down, so i decided to reinforce the base just to be on the safe side!! 2 strips of sturdy hardwood were glued to the base to prevent it bending, which worked just fine. 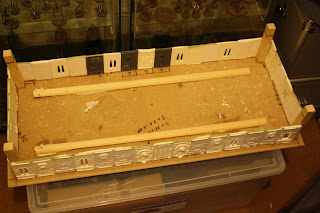 These are the panels for the second level, ready to go! I have to wait for a layer of Milliput to dry on the first layer before i can continue. As the pieces are cast in resin and plaster, they don't all quite come out the same, which results in a few different heights! I used the Milliput to make up the difference on the shorter panels, and create a much more even surface for the second level. 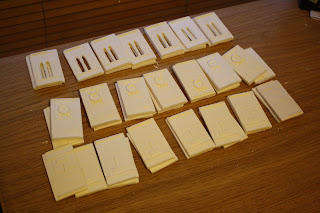 So with the first level drying i decided not to waste any time and crack on with an idea i had for some scatter terrain for the Sewage Works. These are Macerators! Where chunky sewage goes to die - well, diced up into little pieces anyway! The tubs are from Morrisons Cotton Buds, and only cost a quid! The pipes you'll recognise from the Pump Station building, except i used a few of the originals here to give the pieces some weight. 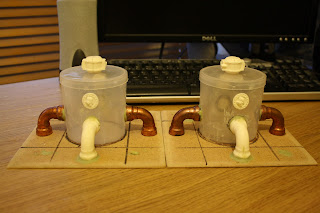 Some Cog Mechanicum iconography and some Cities of Death bits to tart it up a bit! The assembly on the top is the motor for the macerator blades within! 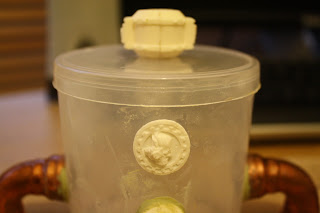 So then i found myself waiting for more Milliput to dry! To pass the time, i took these pictures of the new storage Ive just installed in the garage for my fast growing collection of terrain! 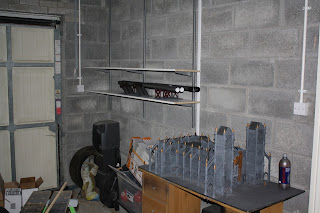 These modular shelving units are from B&Q, and were quite pricey. The whole lot (3 strips, 6 shelving brackets, and 2 long shelves) cost me juts over £70. A lot i know, but the space it  creates for me is invaluable, especially as I'm growing out of my hobby room! 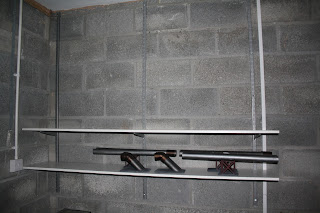 Some of the Aqueduct didn't survive the trip to Ponterwyd for the Apoc' game, and will require some touch up. I'm going to try using some clear wood varnish on my terrain pieces to protect them a little more. 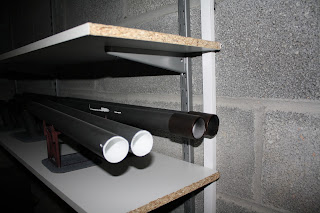 Finally, here are some Necron Warriors that i got offa eBay! 30 Warriors for £30 - not bad! They're painted shite, but that's not a problem, because that's what makes them cheap!! 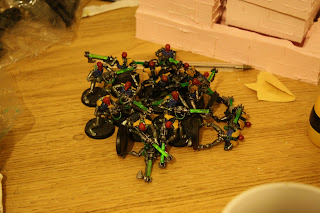 I'm slowly turning them into these - re-sprayed and re-based minis ready for assimilation! With the Hab Block in full swing though, painting might be a while away for these guys. 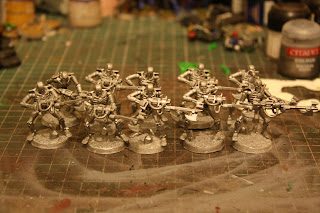 More on the Hab Block later in the week!