The 'Heretics Bane' build is complete!
Its been a large project, but surprisingly has only taken me 2 weeks to build. I reckon that out of that, only 6 solid days of building have actually been spent doing it. This is encouraging, as all the parts for a second defence laser are sitting under my desk! 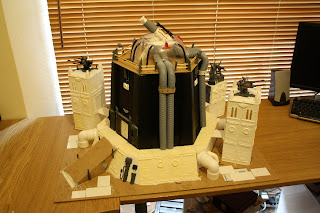 ﻿
So I've just added a few finishing touches since the post last week. Most  noticeably is the railings on the top deck. Originally i was going to use Aegis Defence barriers for this, but they took up to much room. Then i went for Cities of Death building railings, but it didn't look right. Finally i settled on these railings!
﻿ 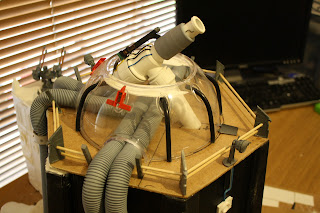 They're made from lengths of wooden BBQ skewer's stuck to cut down CoD Basilica Buttresses.
﻿
﻿ 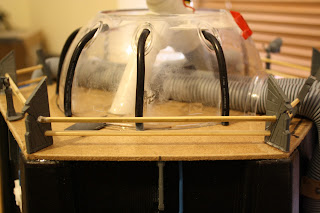 I drilled holes at equal intervals in the buttresses so the wooden rod would sit nicely flush into each piece. It was worth the effort, as assembling it was really easy! 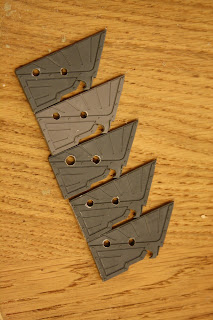 A scale shot here with a Vostroyan volunteer. The railings are the prefect height for minis to see over. ﻿ 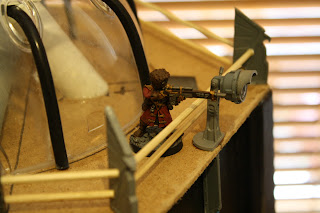 ﻿
Where the railings met the main power feeds i decided to use CoD girders, simply because i didn't have enough Basilica buttresses! I sawed off the bottoms at an angle to make them match the angle of the railings.
﻿ 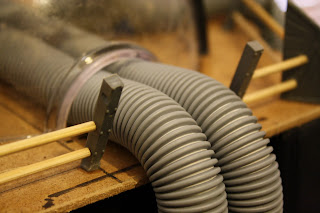 Other detailing includes an access hatch to the top deck. I found this on an old Leman Russ accessories sprue. 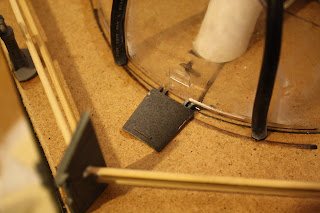 I've added 2 searchlights to the main deck. They're IG Russ searchlights mounted on the bottom half of a CoD lamp post! This made them high enough to reach over the top of the railings, allowing them to be 'maned'. 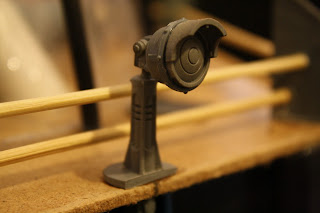 Below the searchlights Ive also added some vents and wiring. 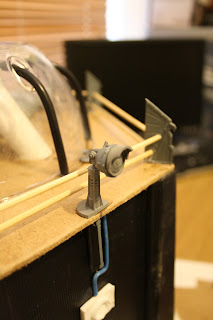 Here's some more detail on the bottom deck. 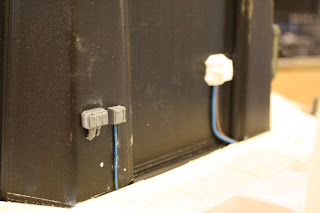 I struggled to jazz up the ramp. In the end i went with the 'less-is-more' approach, which has never failed me in the past! I've added a few CoD bits to the sides and a COG Mechanicum as well. I originally wanted to put wire mesh over the whole ramp, but when i did a mock up it didn't look right. I'll get it painted up and see how it looks. 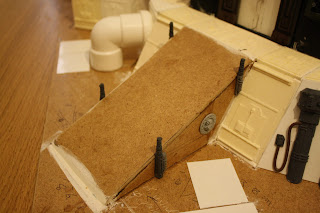 I added some plasticard pieces to the hardboard base to simulate deck plating. It would take to much plasticard to cover the whole base so this will do! 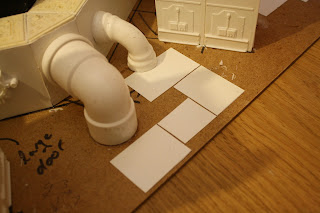 Finally i added the finishing touches to the gun towers. A few Pegasus pillar tops did the trick nicely!﻿ 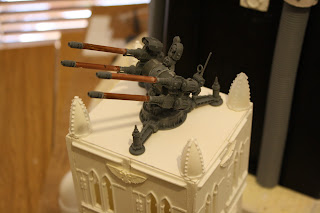 So, another Apocalypse Terrain project nears completion! A buddy from club said the other day that we're seriously going to have to reconsider the number of tables we use for Apoc'! I'm inclined to agree...