Well after a nice 'Implausable Virgin Birth Celebration Day' (as me and my brother like to call it!) I've returned home to a desk full of hobby projects and no effort to get on with them! My mates Khorne army is still sitting there, those 2 buildings, the Custodian project, and no further purchases have been made for the Dark Eldar. The only thing i have done is order the final 2 Elysian Drop Sentinels (as neither of them turned up in my Christmas stocking! DAM YOU 'CLAWS!)

SOOO, as i was sitting in my Forge today trying to summon the will to paint, my gaze fell to my beloved Death Korps army in their dedicated display cabinet. As i stared at them for inspiration, i saw that they just didn't match up to my more recent Guard paint jobs; the Elysians, the Vostroyans, both army's are stunning in their own way with paint jobs that do the models justice (if i do say so myself, ahem....) So i began cruising the net to see if i could find a scheme, and it didn't take me long to find a suitable one! I quickly set about doing a test mini and here it is! 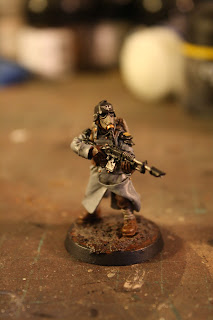 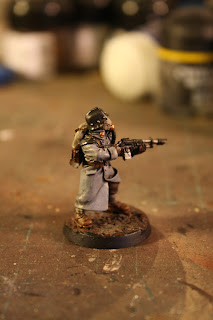 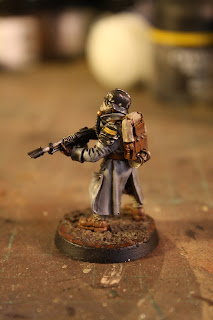 To be honest i much prefer this paint scheme to the original! The additional colours make the model pop a bit more! I like it so much I've started painting up the rest of the squad already! I was kinda hoping that i wouldn't like it, which would mean that i wouldn't want to paint 120 Kriegsmen in a new scheme along with all the accompanying armour and artillery!! I'm trying to think of it as painting a new army without having to buy one (which is a good job to considering how much this lot cost!)

Here's a comparison to the current scheme: 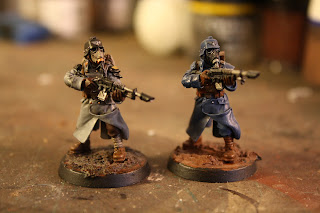 ﻿So what do you think?? I'm really enthusiastic about this idea, and I'm hoping that it'll breathe a bit of life back into the Krieg!
On another note, the Legio Custodes project! Well, i haven't made any further attempts to sort out the torso-sculpting problem, but i have bought some torsos off of Scibors miniatures that might help (picture used without permission, but I'm sure they wont mind!): 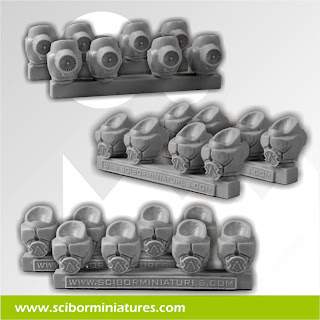 ﻿Im hoping that these can provide me with a batter shape on which to base my conversion. I also love the rotors on the backs, very pre-heresy i thought! I'll get rid of the Spartan iconography on the belt and replace it with something more suitable. The pecks, well, ill decide what to do with them once Ive done a mock up. I may smooth them out with putty and sculpt on some detail or i may keep it! Once they arrive things can get moving again!
So that's it for now! Watch this space for more Krieggy goodness with a sprinkling of Custodian (hopefully!)
Laters
at December 28, 2010