Well I've been hampered by work once again in my attempts to progress with the re-paint, but did make some headway on the first squad while Mrs Gungrave was out this evening! The more i do the more i believe i made the right decision about this repaint! As it stands i have most of the basic colours on, just the washes and highlights to go. 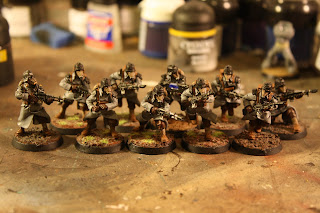 In an effort to save time on this project i visited my old mate The Army Painter and picked up a tin of their Uniform Grey. Its pretty much Codex Grey in a can, ideal for the greatcoats of the Krieg. 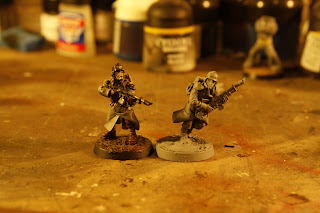 I have a few days off coming up and Mrs Grave is off for a girly weekend, no doubt pillow fighting in pajamas for two days solid if my imagination is anything to go by! So, wandering imaginations aside, I'll get another squad or two repainted by the end of the week. I may also start on that awesome Dark Eldar Archon i bought a while back, we'll see.