Well its been an interesting week of trial and error, but it has been well worth it! Not only have I had immense satisfaction from doing this mini, I've also added a great and useful painting skill to my repertoire!

So without further chit-chat, here is the first (of many i hope!) Custodians: 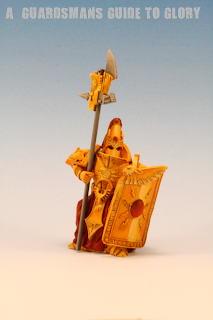 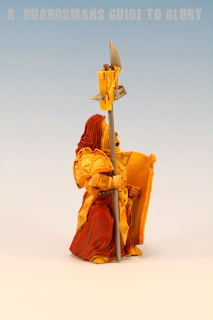 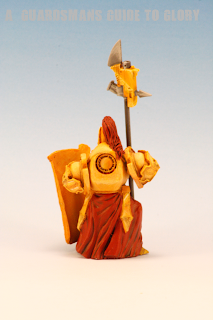 Not much in the way of adjustments to the gold from the last post. I decided to keep the red robes and helmet plumes reasonably dark to contrast with the gold, and hopefully make the gold look a bit brighter. The eyes i just washed with Badab Black, as there wasn't much in the way of lens detail in the sockets. It does make them look slightly grim in the face, but i like to think of it as a serious look! (well, they are guarding arguably the most powerful being in the galaxy!)

The biggest addition since the last post, is of course, the Guardian Spear. Again i tried to go with the gold NMM look, and i think i pulled it off much better on the bolter than anywhere else on the model! I've decided that this is because there is a starker contrast between the reflective strip and the background colour (ie: the background is much darker than the reflective strip) On the next Custodian (which is already under construction) I'll  try and apply this to the whole model, and hopefully achieve a better overall NMM look.

The other challenge was painting the chrome/metal parts in NMM as well! I hadn't considered this until i picked up the brush to paint it, as id been so focused on the gold! It wasn't hard though; just the same technique but with a different colour palette. Again, i think the chrome on the bolter is one of the better examples of NMM, for the same reason as above i think.

So that's it from the Custodians for now! Another two are mid-build in the forge at the mo', but the arrival of a Hive Fleet above my house is interrupting production (i know, Wales is a crazy place!) So next post, Hive Fleet GunGrave returns!!
at January 31, 2011