So before i did the hazard stripes on the second Knigt Styrix, i did a bit of research on how i could jazz up the stripes. They would draw a lot of attention from the eye as they contrast so starkly with the red of the hull, so i wanted them to be a bit more special.

The tutorial i decided to follow was from Spikey Bits blog. I loved the technique, although long winded, and really wanted to give it a go. You'll need an airbrush and some suitable paints to use in it.

First up i had to tape up the shoulder plating. this was no easy task over an uneven and curved surface! In light of this i know the stripes arn't perfectly straight. But by the end of the process (and this was actually my 3rd attempt at successfully hazard striping these pieces!) I'd had enough! 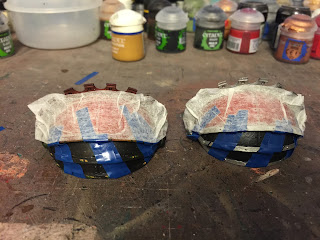 So first stage was a layer of Vallejo Game Air  Beastly Brown. Black is far to dark to apply yellow straight over, so you need to build it up from black to make sure the yellow actually looks yellow! 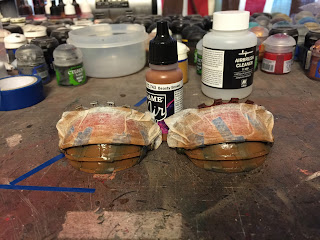 Next was Leather Brown. 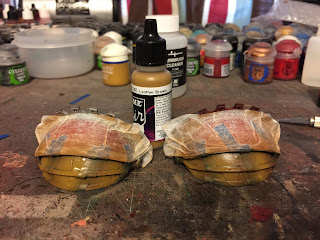 Now it was time for a bit of yellow. A layer of Gold Yellow was  next. I was careful to leave a bit of the brown showing at the edges of the stripes to create some contrast. 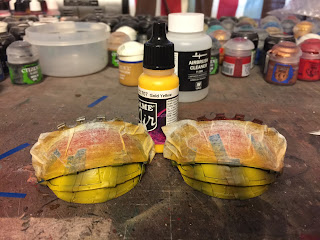 Now, to make sure the yellow achieves  its full colour a layer of Dead White was applied over the yellow, again carefully leaving some darkness at the edges. 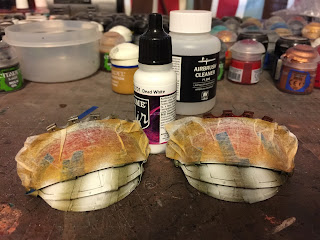 A second pass of Gold Yellow. You can see the difference here from the first pass of yellow. 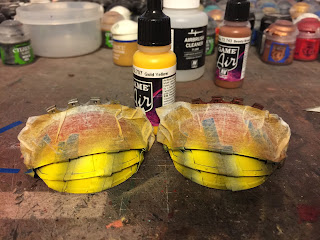 Now we've had 4 passes of colour with the airbrush so the contrast could be a little overpowered by now. To make sure I got the contrast i wanted, i gave the edges if the stripes a thin pass of Beastly Brown again. 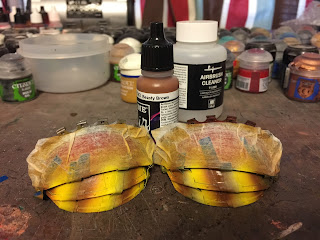 Then i softened up the edges of the contrast with some more Gold Yellow. Looking back i think i should've been braver with the contrast here - i think i didn't leave enough brown. And that's it! It does seem a bit of a long winded process, but the layers of paint are so thin they dry quite quickly. I sped things up a bit with a pass with Mrs GunGraves hairdryer between layers.

It looks a little messy at this stage... 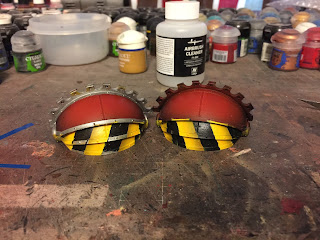 But once i got the trim on it looked a lot better! 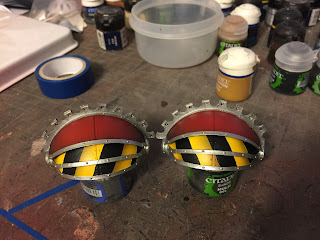 If i have occasion to do this again then i would definitely make more of an effort on the contrast. Not bad for a first attempt though! I'm looking forward to finishing the Knight and seeing the plates on properly.