Somehow, a Mechanicum Ordinatus Ulator made its way into my Alpha Legion order recently....To this day i still don't know how that happened, Perhaps a gift from the Hydra! So, not being one to question these things, i began working! The Alpha Legion will  have to go on the back burner for the time being.

I have loved this model since seeing it at the 2015 HH weekender when it just looked like this: 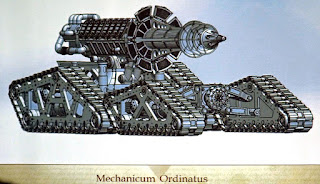 To be fair, it hasn't changed much since that imaged was shown that weekend so my love for it hadn't diminished. Now just over a year later, I've got one of my own on the go. Oh, and if you haven't read the rules for this beast, go and do it NOW! Its a monster on the field, the bane of tanks and armor at huge distances! 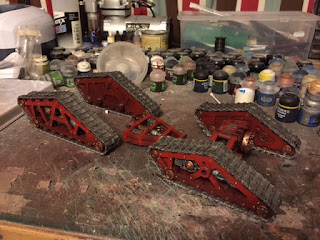 Its about a foot long, fitting for a tractor on steroids carrying a titan-class weapon on its back! Its full of detail of course and maintains the great visual cues that are found throughout the Heresy Mechanicum range.

These are the parts for the weapon itself (a Sonic Disruptor if memory serves) I should be making a start on these parts soon. as the Mechanicum models are so detailed, i'm having to paint most of the parts before assembly, which is lengthening the process somewhat. 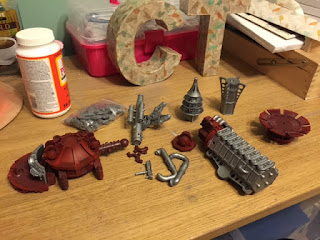