While working on the Ordinatus my mind kept wandering to the Alpha Legion test mini i did the other day. I really felt the need to get the color scheme down on some proper models....i really needed to scratch that itch!

So i put the Ordinatus aside for the time being and rummaged through my box of shiny new minis. I didn't want a character model, not until i was happy with the colour scheme, nor a large squad that may be to laborious to paint. So i picked out a 5 man Destroyer Squad to get me started.

Destroyers are not something I've considered in the past (strange considering i play Death Guard!) but they seemed to strike a chord with me for my Alpha Legion force. Weapons of terror seemed apt for the masters of subterfuge, and i could see these guys causing chaos behind enemy lines with their rad grenades and phosex bombs.

But first! I got the squad assembled and swapped out their heads and shoulder pads for some Alpha Legion heads and pads. The sharp eyed of you may notice the very old Citadel Urban Basing kit added to these bases, which i cast up some time ago. As this was the first army of mine that would be mounted on the new 32mm bases, i needed to fill up all that extra space! In fact, the basing kits spill over the sides of the 32mm bases just slightly which gives them a nice display-piece kind of feel. 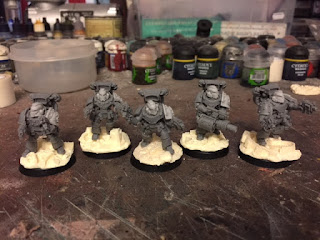 The Destroyers were undercoated in white. Then sprayed in my transitional Teal paint. 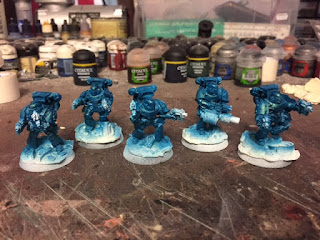 I then went on to apply a slightly thinned down Asurman Blue wash over the whole model. I didn't photograph this as it didn't show up very well. Next up it'll be onto the details.