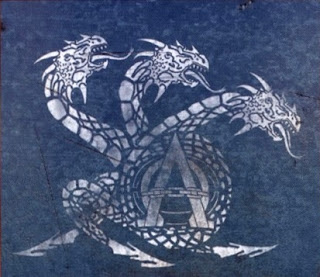 After finding my hobby direction again in the form of a few Imperial Knights, i got to thinking Heresy again. Its nice painting big models, but after a while i really fancied painting some infantry. With not a great deal of infantry lying around, this meant a new army! Fortunately for me, i had been recently been inspired by the new HH novel 'War Without End'. In particular the short story 'The Harrowing'.

In brief its a short story about the Alpha Legion and their infiltration of a Mechanicum bulk transport full of Titans! I won't spoil it for you if you haven't read it, but it was very cool and i really liked the way the Alpha Legion operated. They weren't a Legion that i had really taken much notice of in the past, but this story gave me a new appreciation of them. I especially like their 'Legion Flaw', where they were compelled to ensure that the enemy knew how awesome they are and how much the Alpha Legion had royally screwed them before their inevitable deaths! If they don't achieve this, then they felt that they haven't fully completed their mission. Pretty quirky.

So what does this mean for the hobby? Well, a brand new Alpha Legion force of course! I didn't go to mad, just a few squads, transports, snipers, jet bikes, etc (:-S) My force will be more designed to be an ally to fellow Traitors rather than a stand alone force. We'll see how it goes.

So my models arrived the other day, but  before i broke them out, i had to nail down a decent colour scheme. I had trawled the internet for a scheme i liked: blue with a bit of green, green with a bit of blue, cyan, teal, the list was a bit endless! Then i stumbled upon one hobbyist's efforts with a metallic transition paint with pretty much all of the above rolled into one!

This is it, a metallic paint by Pentart, the colour designation is Teal. 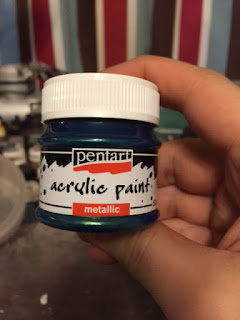 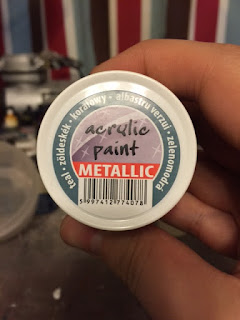 It creates a beetle carapace-like effect which i really loved! The hobbyist had applied this paint to a full squad of marines and a Spartan, all of which looked totally cool! So i jumped on eBay and grabbed myself a pot for £5.99. A little steep, but its probably the only pot i'll need for the whole force as its quite big.

I did 2 test minis: one with a basecoat of white and one with a base coat of blue. Reason being that as i want sure how the paint would come out on the mini itself, i wanted to give myself a bit of scope with a light undercoat and a darker one (black being way to dark so i didn't bother) 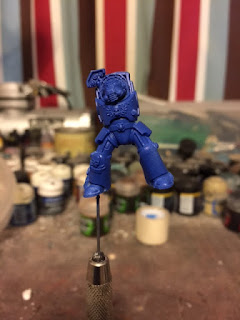 So on the Teal paint went and these were the results: 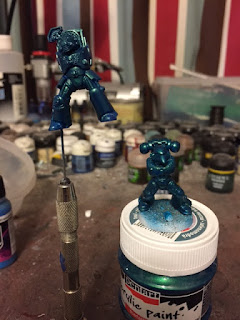 Looks great, but you can see how the blue undercoated Terminator on the left produced a darker colour than the white undercoated marine (which of course was expected) I wanted to apply a blue wash over the top of this to provide some quick shading, so we'll see how they fare after that. 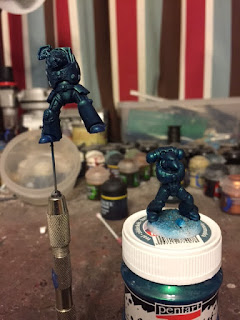 You can see now how the Terminator is a lot darker now following a Asurman Blue wash. While the shading is good, i felt that it had darkened down the base colour a bit to much. A bit more work would be required to brighten up the base colour. The Marine on the right fared better though, so i proceeded with that test mini.

I picked out a few of the details, metallic silver forming the bulk of the additional detail. These were washed with Nuln oil and the eye lenses were picked out in red. If this was a proper mini then i would go over the silver again to brighten it up a bit, but i just wanted an idea at this point. I also brightened up the base colour at the apex's with a thin layer of the original colour.

(I appreciate that the picture is a bit dark, it is a bit lighter in the flesh!) 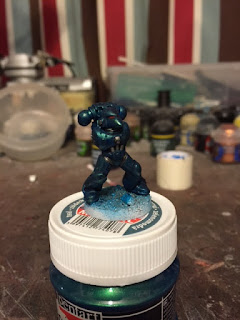 Once some Alpha Legion shoulder pads are on and this guy is packing some heat, then i think the colour scheme will look pretty ace! For now this will be the recipe i'll go with. Now, time to put together some FW minis and get cracking!