Hello readers, I'm back from my unscheduled break from blogging! Its good to be home!

I made the difficult decision to call things off with Mrs GunGrave after 7 years together. Cue violins! The split was amicable, but severely disruptive to normal 'life' operations! Not only was i on the cusp of starting a new job - which has netted me a cool £800 in overtime this month (ring ring, hello? Forgeworld? 2 Reaver Class Battle Titans please! Weapons? Ah, surprise me dude!) but i have moved out of the house and into a new bachelor pad across the road from work, but 50miles from the old place!

So I've been tackling the new job, house hunting, spending TONNES of money at Ikea, and moving into my new place these last 2 months. There is now light at the end of the tunnel, as the last of the boxes were put up in the attic and i stood back and admired my new Forge!! 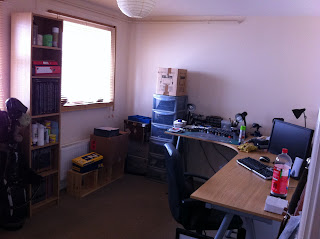 I've doubled the space i had in the last house! This is actually my spare room, but my Tech Priests suggested that it would make a far better Forge! I was inclined to agree! I still haven't put up the pictures, posters, and that handy wall-mounted tray thing that i kept my bitz in. Soon....﻿ 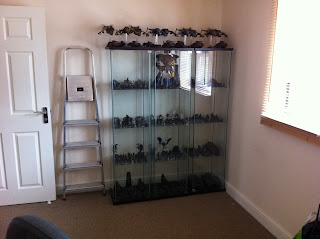 At the other end of the room are the display cabinets and my babies!! There was minimal damage in the move, but Praetorian lost an arm! Nothing broke, the glue just gave way. They seem happy in their new home!
So whats next on the hobby front? I'll still be taking it easy for a while, as work is chewing through my free time like a Hades Breaching Drill through Nurgle cultists!! I will be going back to the old house to pick up the unpainted 'Heretic's Bane' and get that terrain project squared away. Ex-Mrs GunGrave is kindly storing all my Apoc' Terrain in her garage for me, but with the amount of space i have in this room, I'll be able to run at least 1 Apoc' Terrain project at a time. I also have that squad of SW Long Fangs to paint!! I'm hoping to finally get that army finished so i can concentrate on my 'Crons - and the superb looking models that are about to be released for them!
Watch this space, The GunGrave is back!
GunGrave
at April 27, 2012 9 comments: