Yeahhhhh i kinda went Knight crazy after the Acheron was done! Not only have i got the Lancer on the go, but theres now 2 Questoris Knight Styrix on the way as well! We'll have a full blown Mechanicum household on the go in no time!

So this is how far i got before my venerable airbrush sprayed its last spray. After 5 years of service, it died, and nothing i could do would revive it. So this Lancer will have to stay on ice for a while until i can get a new airbrush and finish off the armour plates. 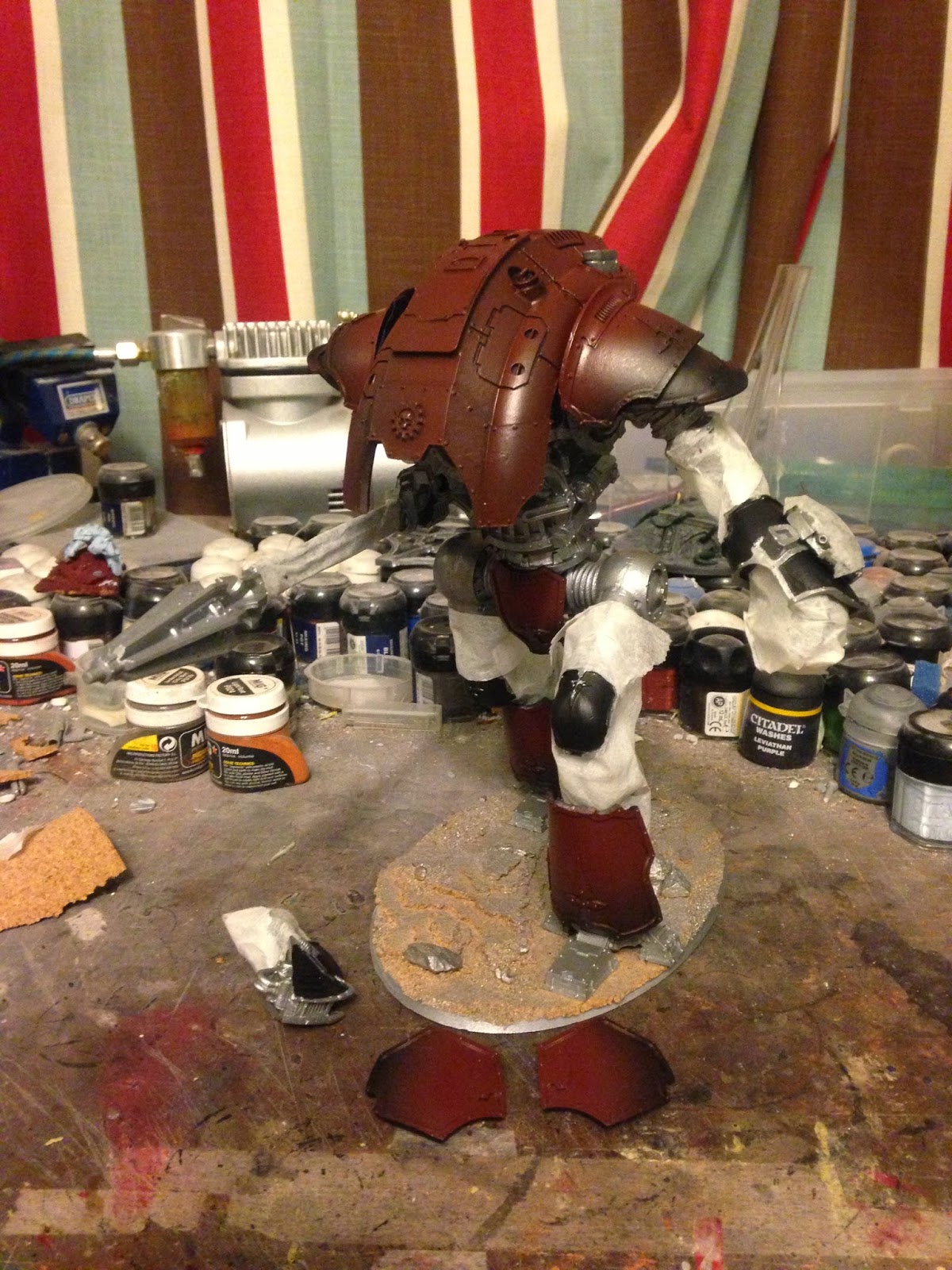 Something my death guard have really suffered from is a lack of armoured support. This is about to change very soon!

BOOM! Fellblade! The mother of all pain-in-the-arse tanks to put together in the history of table top wargaming! If the finished product wasn't so dam sexy, the thing would've gone in the bin half way through. I think we'll all agree, the problem with this style of chassis is.... all together now....THE TRACKS!! 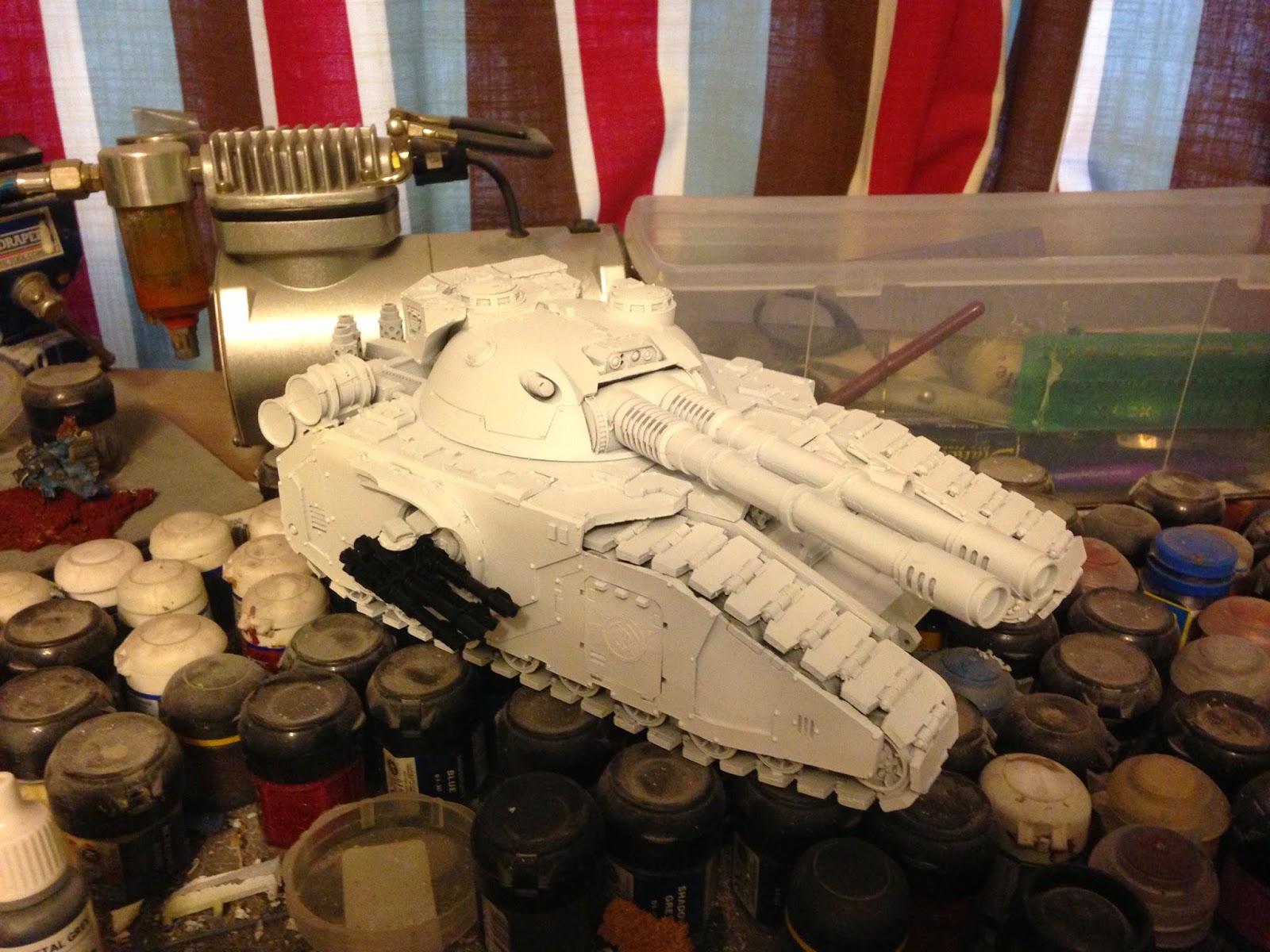 Anyhoo, now the beast is assembled i gave it some extra special Death Guard treatment with some brass etch. The sponson laser destroyers are magnetised. He'll be moving up the painting que soon! 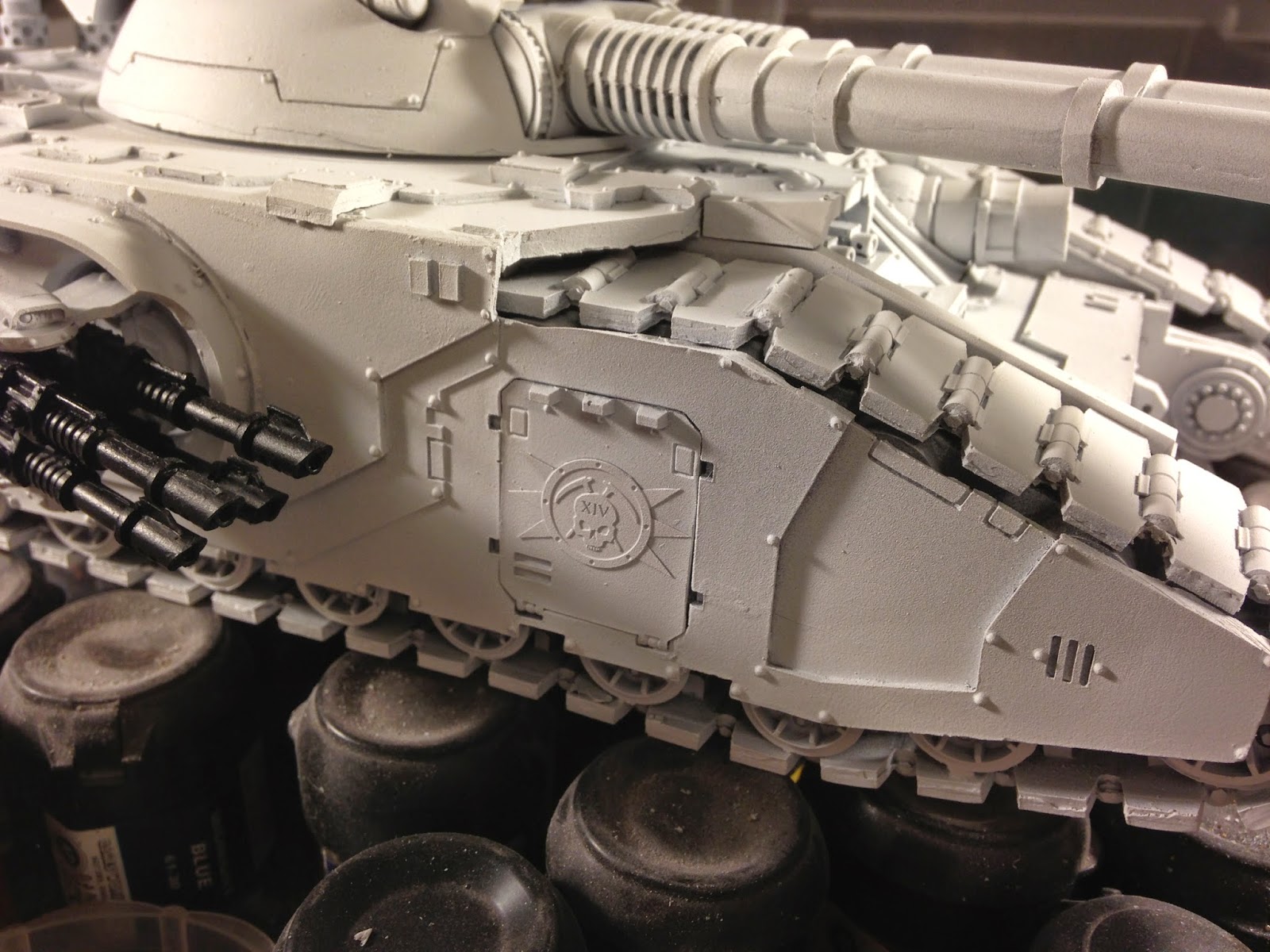 Waiting in the wings, some more armour! Two Sicarian Battle Tanks are patiently waiting for their paint jobs! I need to do a bit of filling on the rear of both tanks first, but that shouldn't take to long. 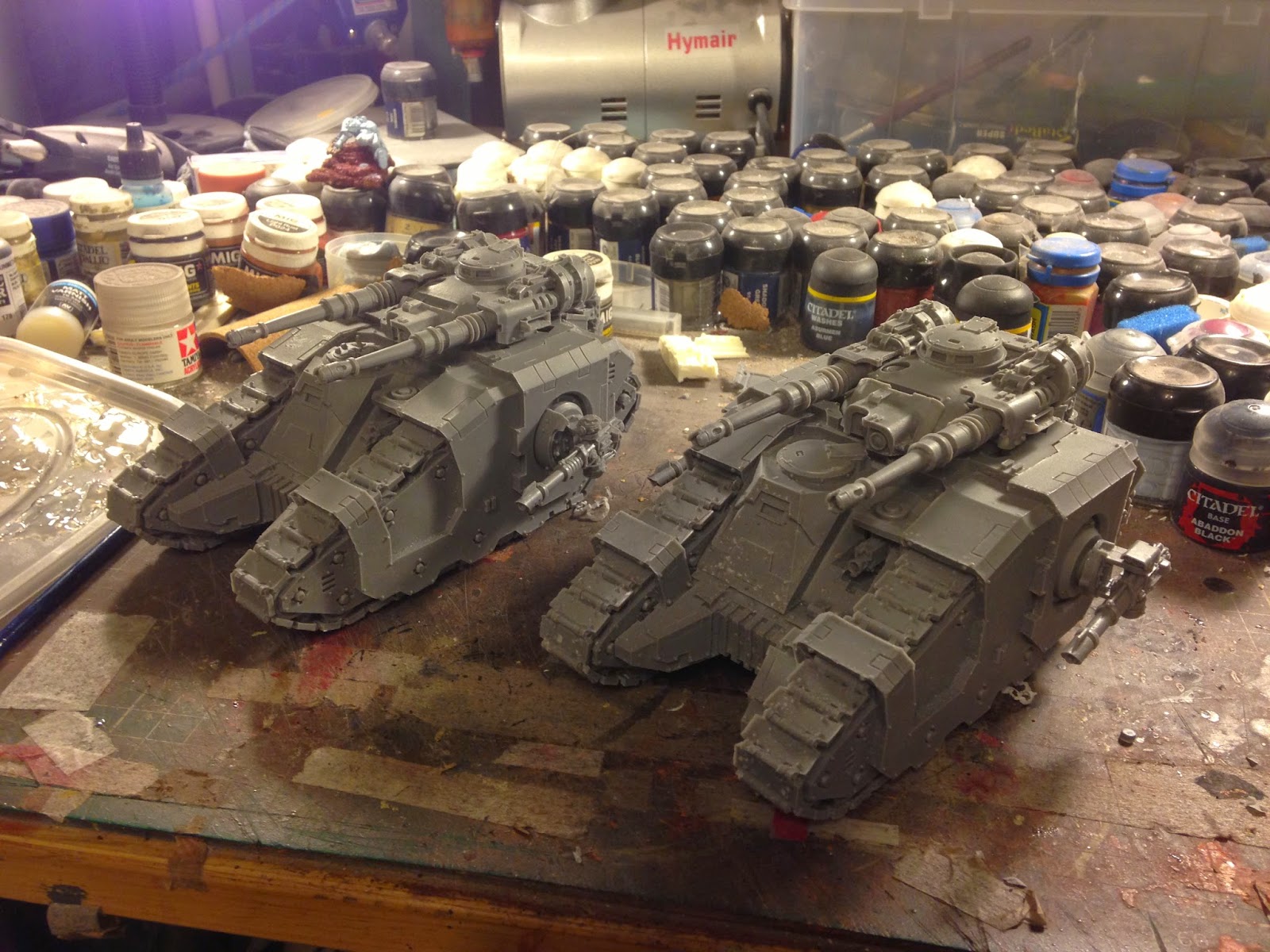 The Death Guard are about to pack a lot more punch!

I picked up 2 squads of these minis at the Horus Heresy Weekender in Feb this year, i was instantly in love with them! And as a bonus, they're dead easy to paint!

I knocked out these four in a few hours and they're more or less done. A word of caution for any other Magos out there thinking of adding these to their army; keep the mechandrites tight to the body! I had to reposition them 3 times because they were just so gangly! Get the pose right first then stick them on. Sound obvious, but it did cause me a lot of headaches during the build! 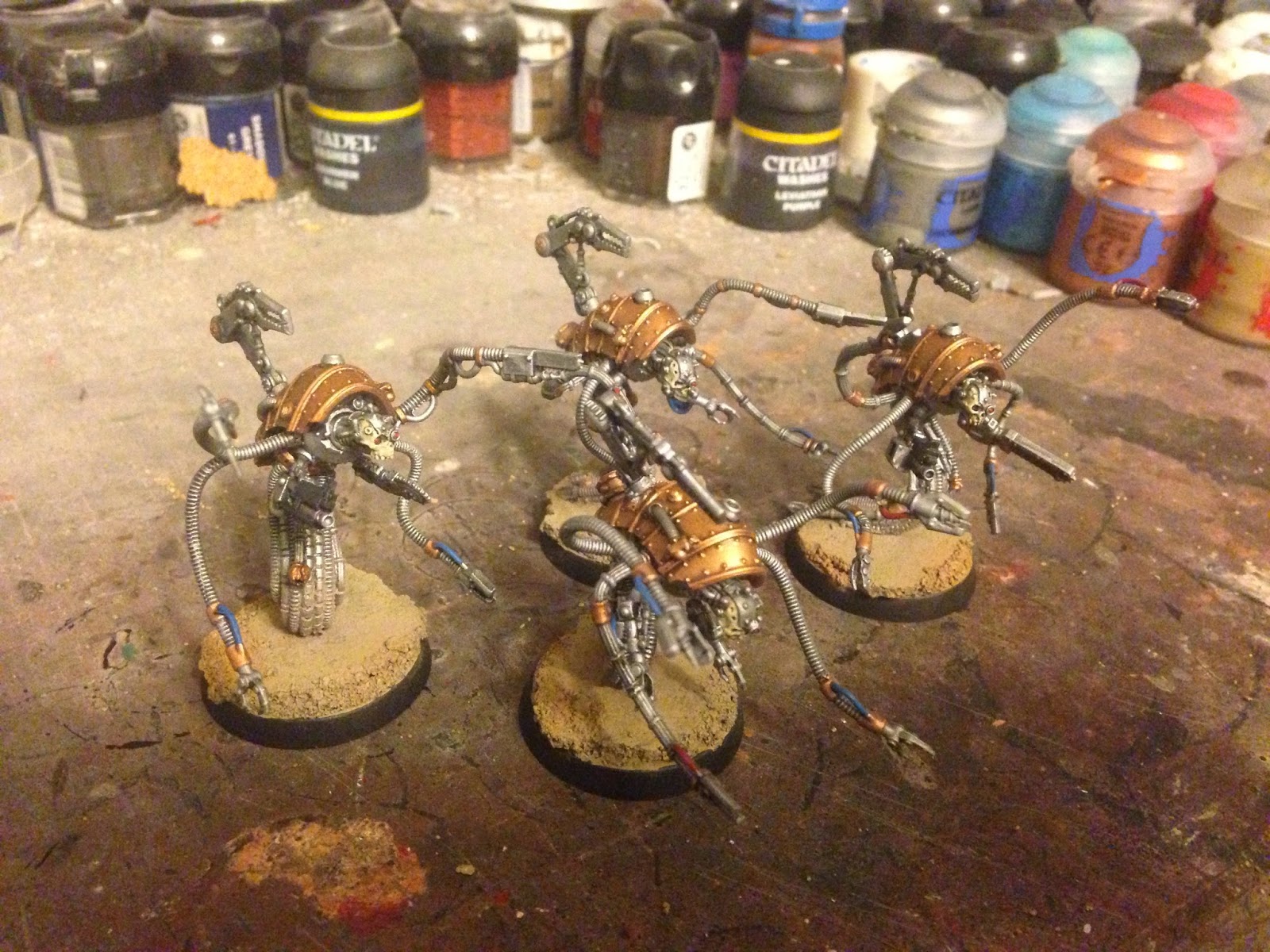 The finished product will be along soon!

Wow, its been a very long time since this model saw some love! However, i find myself needing it for the upcoming Bristol Vanguards Vanquish tournament at the end of the month, so its jumped to the front of the que.

The base colours are down, so it'll be washes and weathering next. But first, i had to get the crew organised. 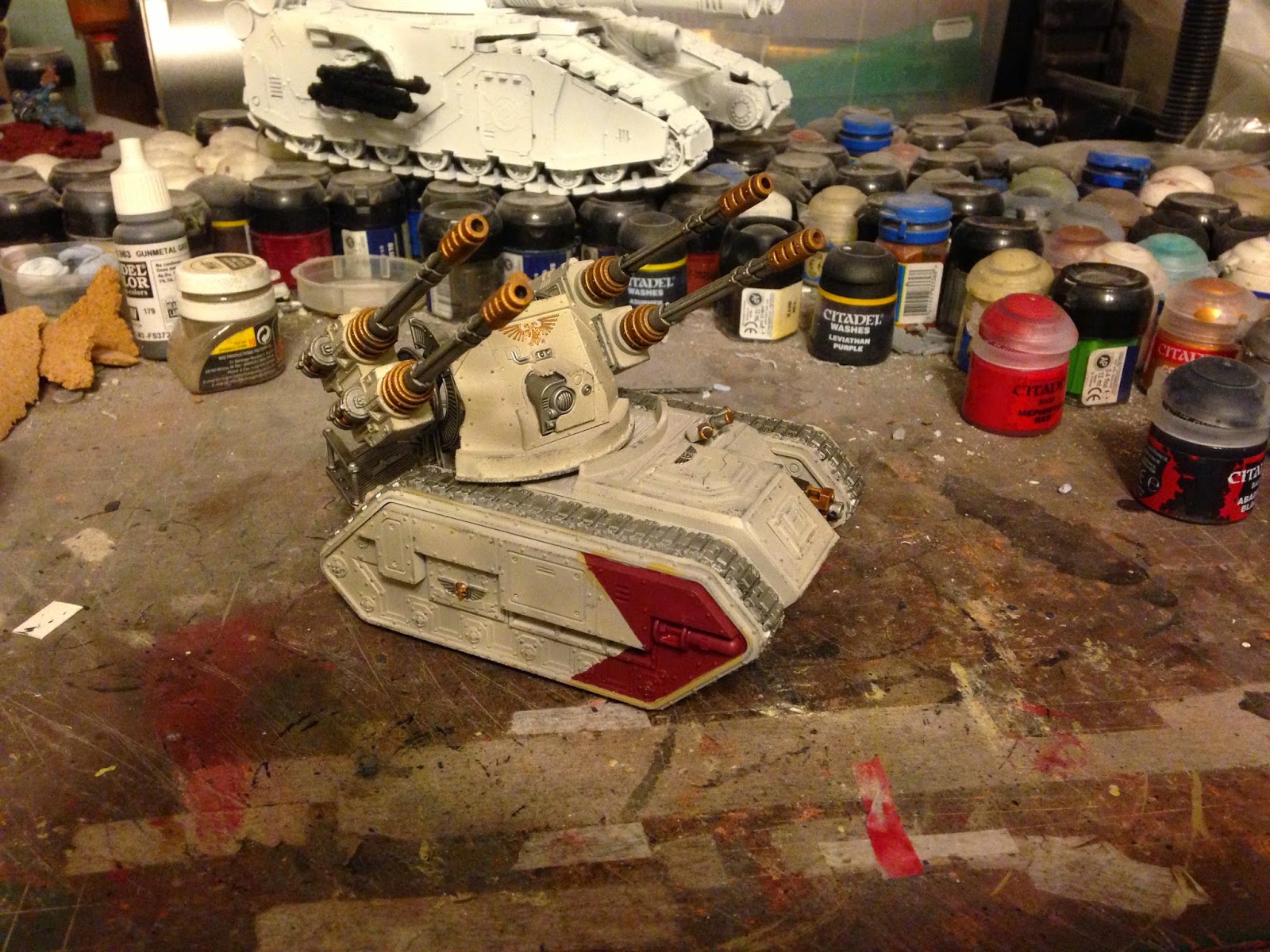 The kit comes with 2 basic Cadian crew members - this just wouldn't do for the Firstborn. Thankfully i had a few spare Vostroyan models lying around which would lend itself nicely to the Hydra. First up it was the gunner. 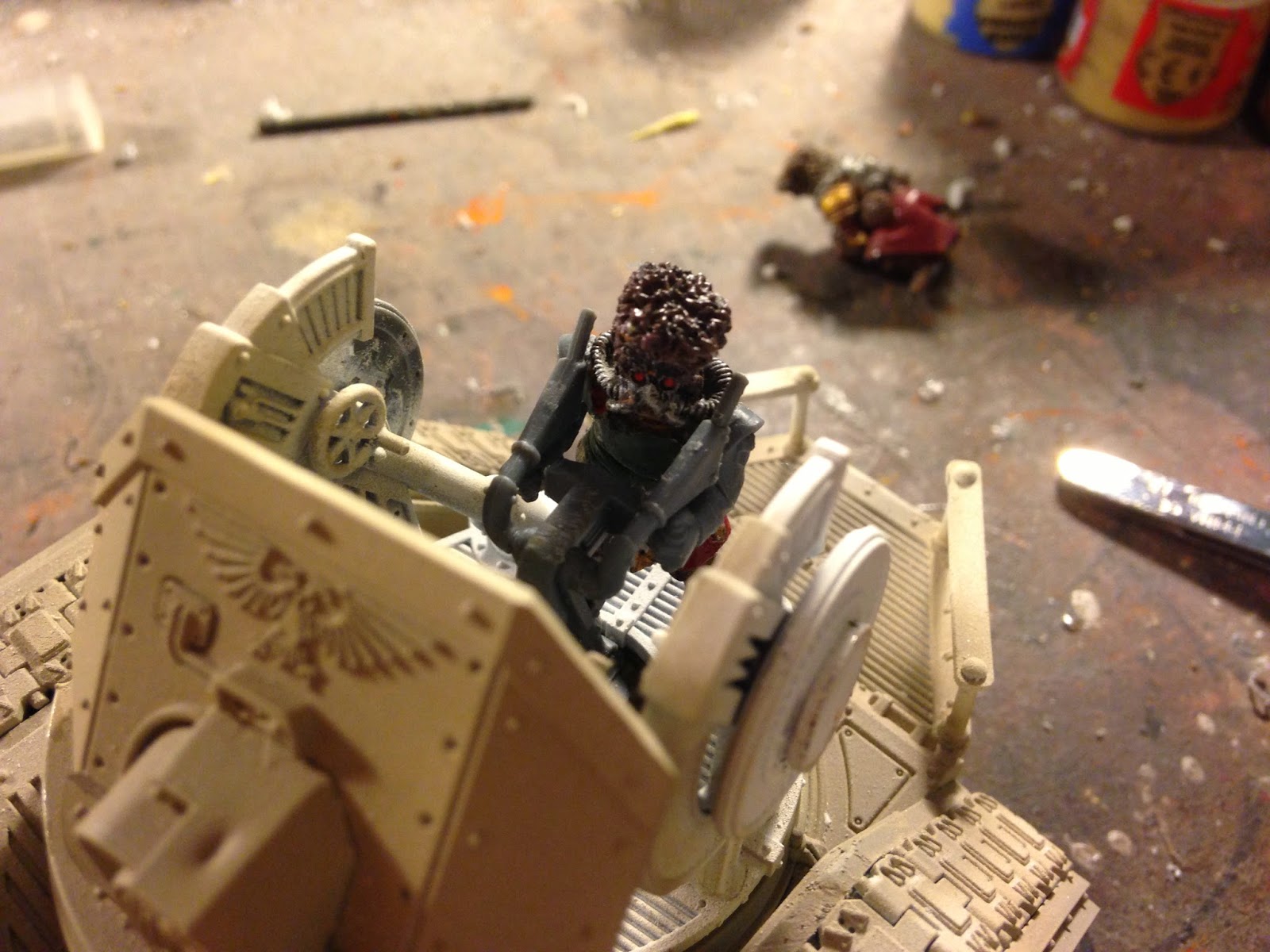 This Vostroyan was a Plasma Gunner before i chopped the whole thing off! This left a hell of a mess on the front of the mini, so i used green stuff to rebuild the chest plate. 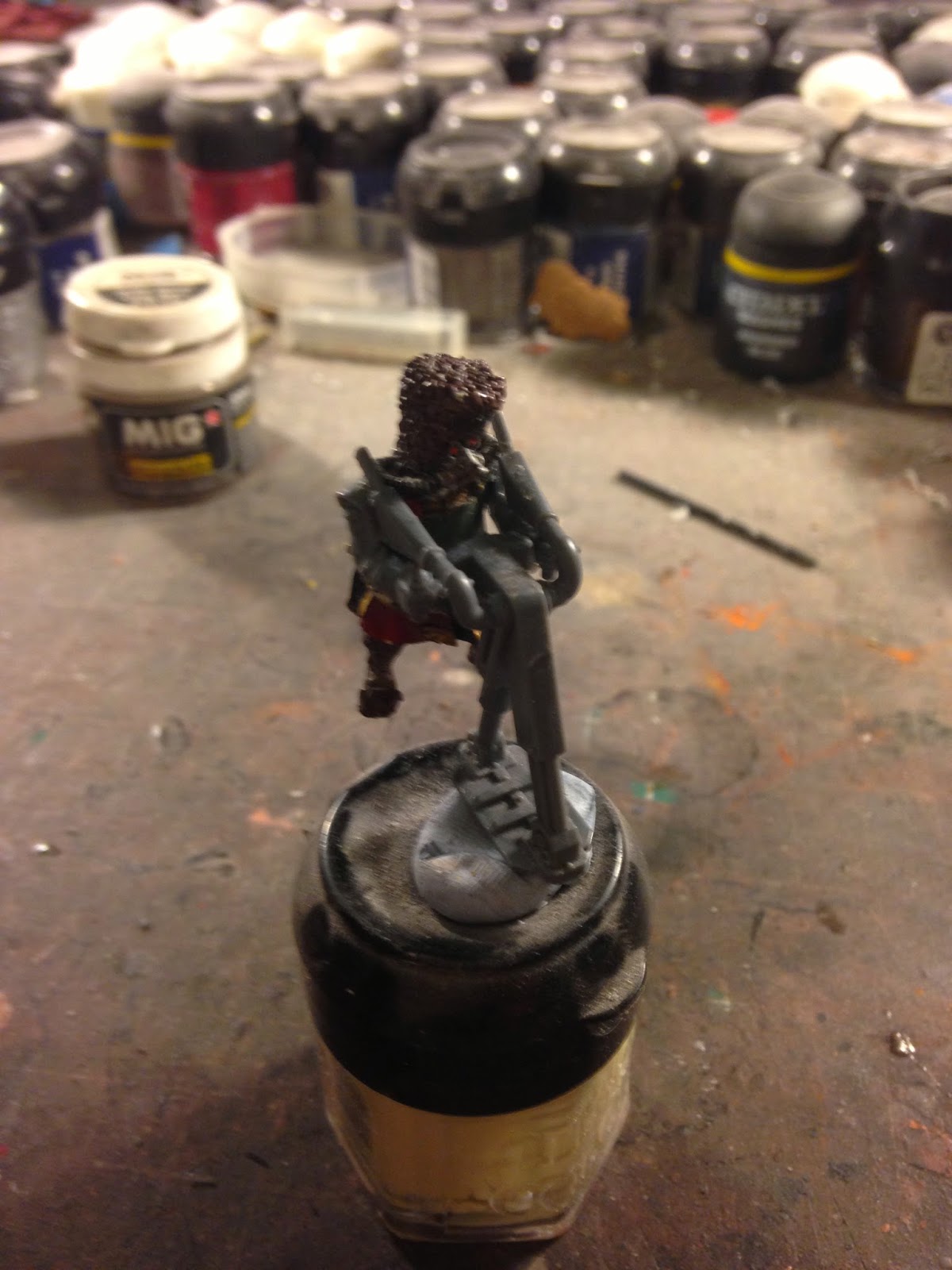 I used the standard cadian arms of the original gunner for the Vostroyan version. this made life a lot easier for me, and the style wasn't to dissimilar to Vostroyan arms. Passable at least! 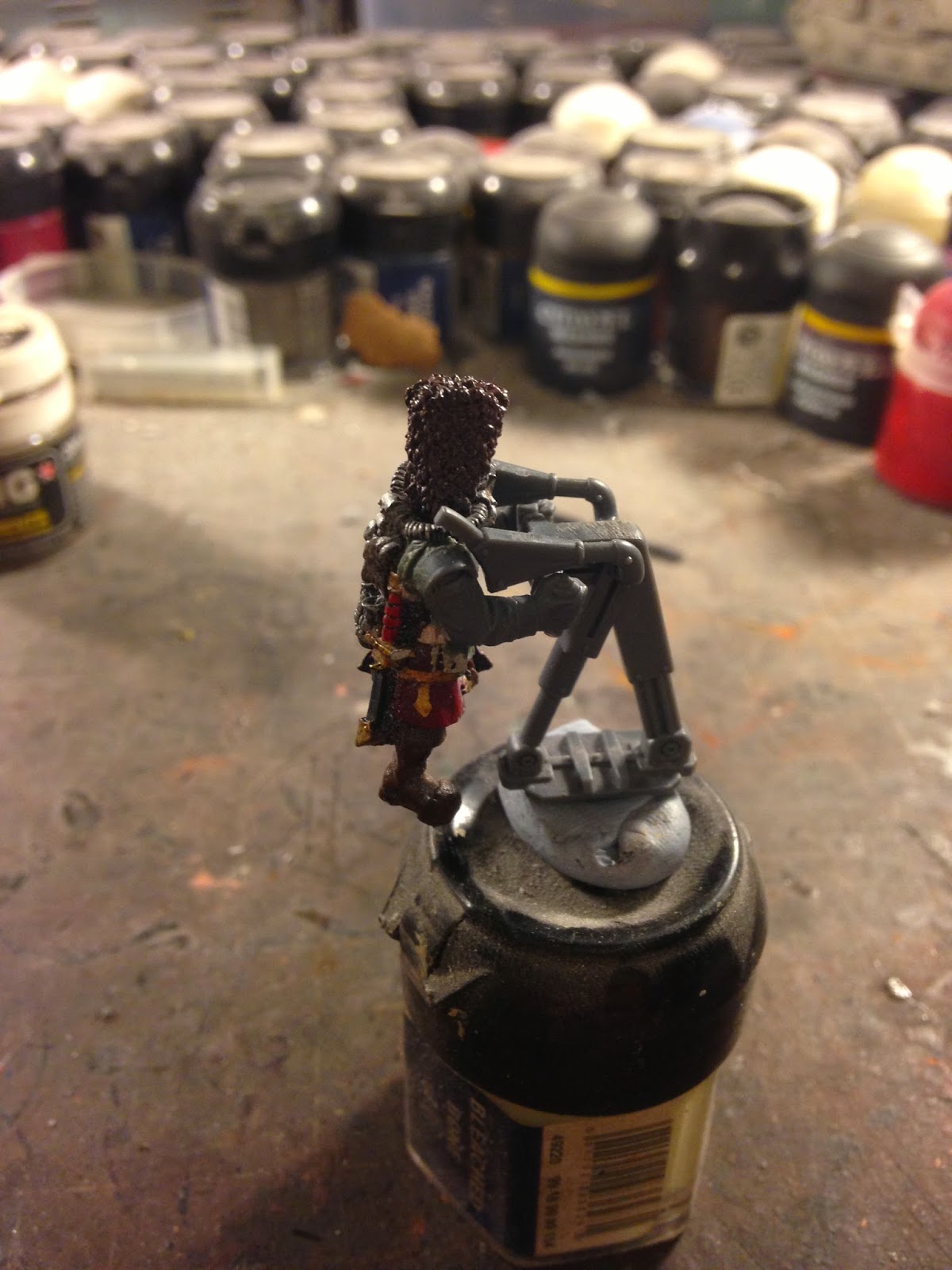 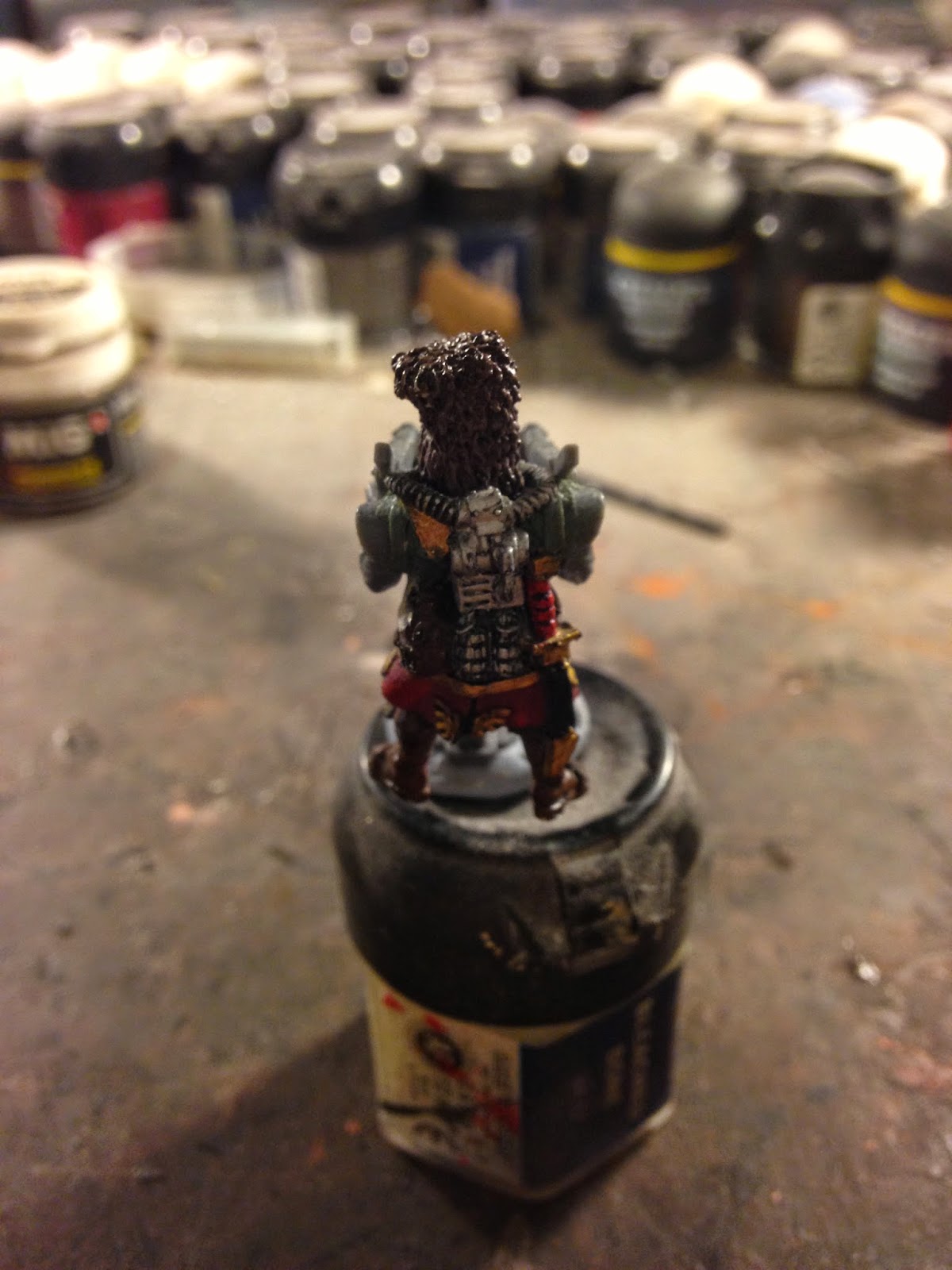 The second crew member is the Loader. No conversion work was required at all on this guy, i thought he looked good enough as he was! He used to be a heavy bolter loader in his past life. 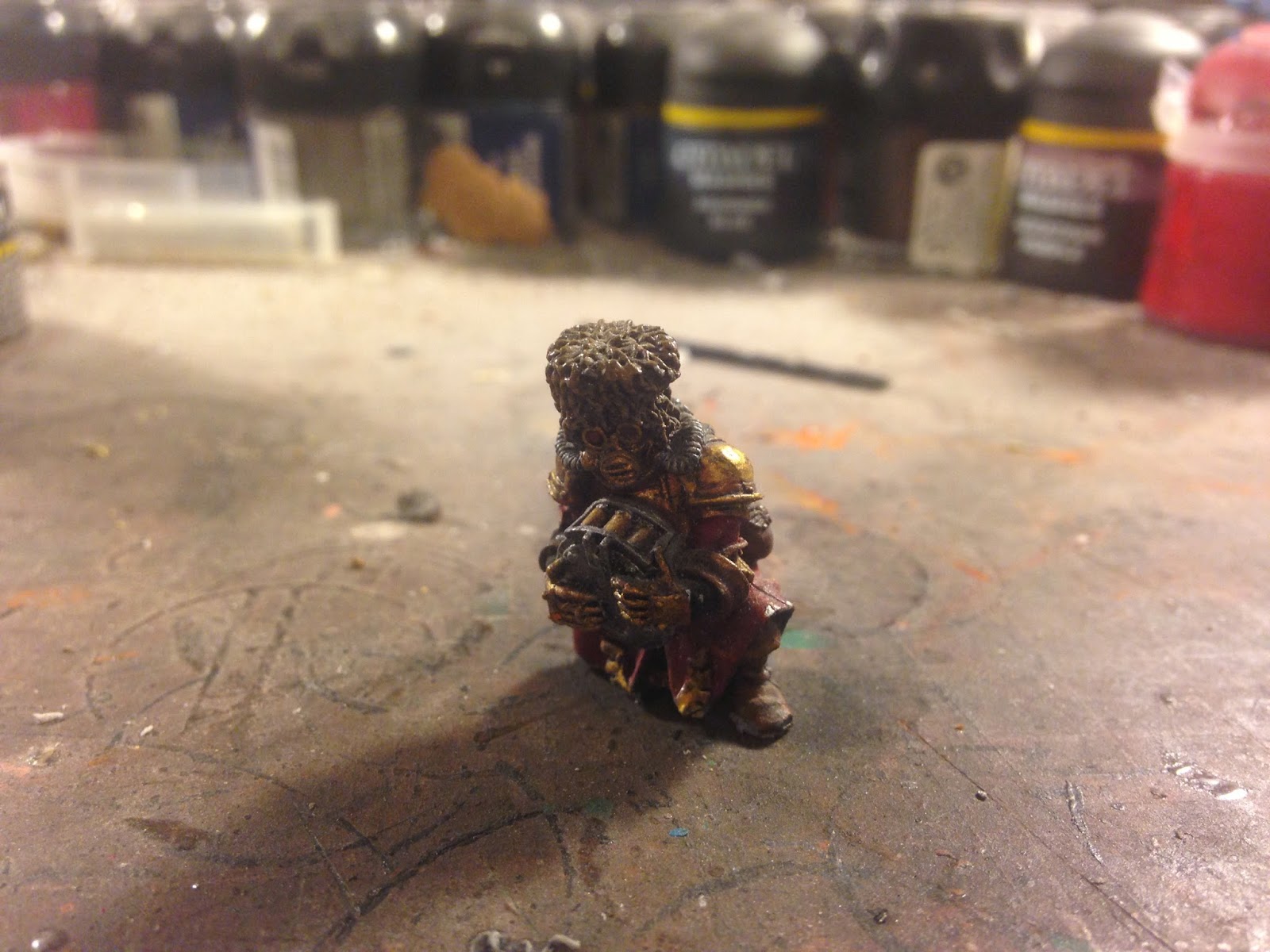 both crew need repainting - they're still sporting the same paint job they had a few years ago!! These guys are really going to help me personalise the Hydra a bit. But i better get a move on!!

I've had these Death Guard Legion transfers hanging around for a while now and i thought it was about time i got down to applying them to my vehicles. as you can see, i had a bit of work to do! 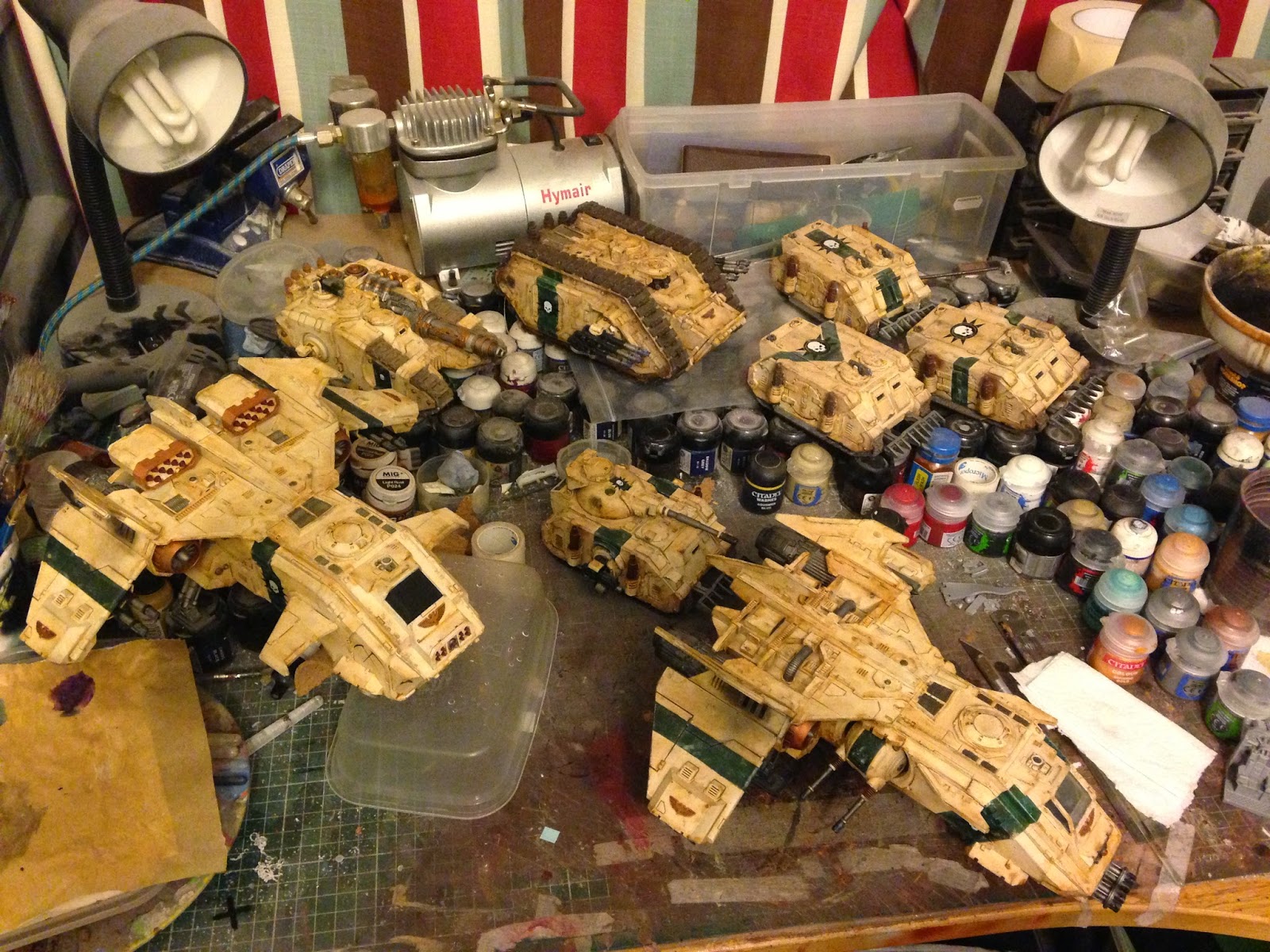 The Storm Eagle will carry either Old Morty or Typhon depending on the game, so it needed to bear the Scythes of Moritarion on its hull. 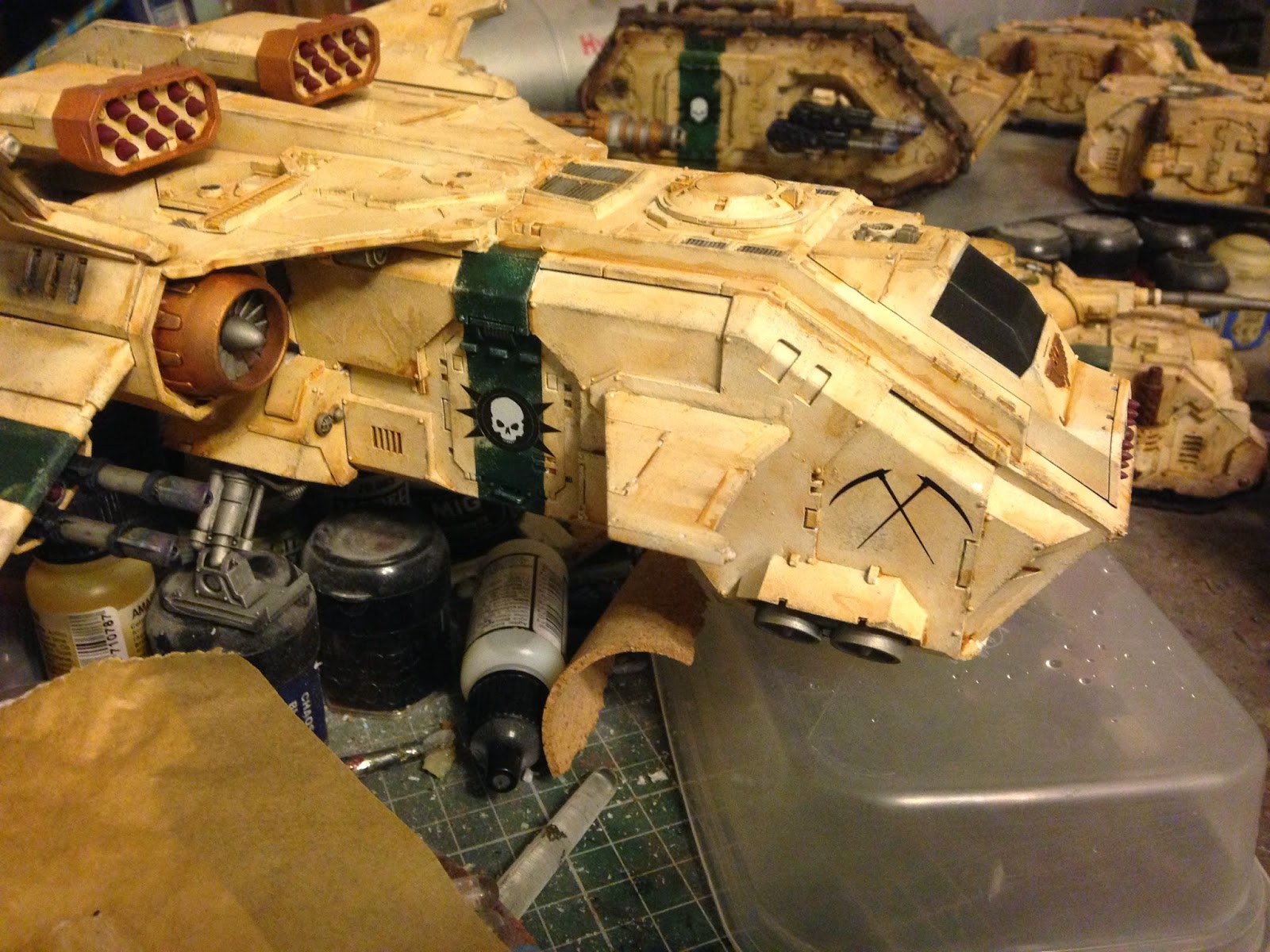 Same goes for the Spartan! 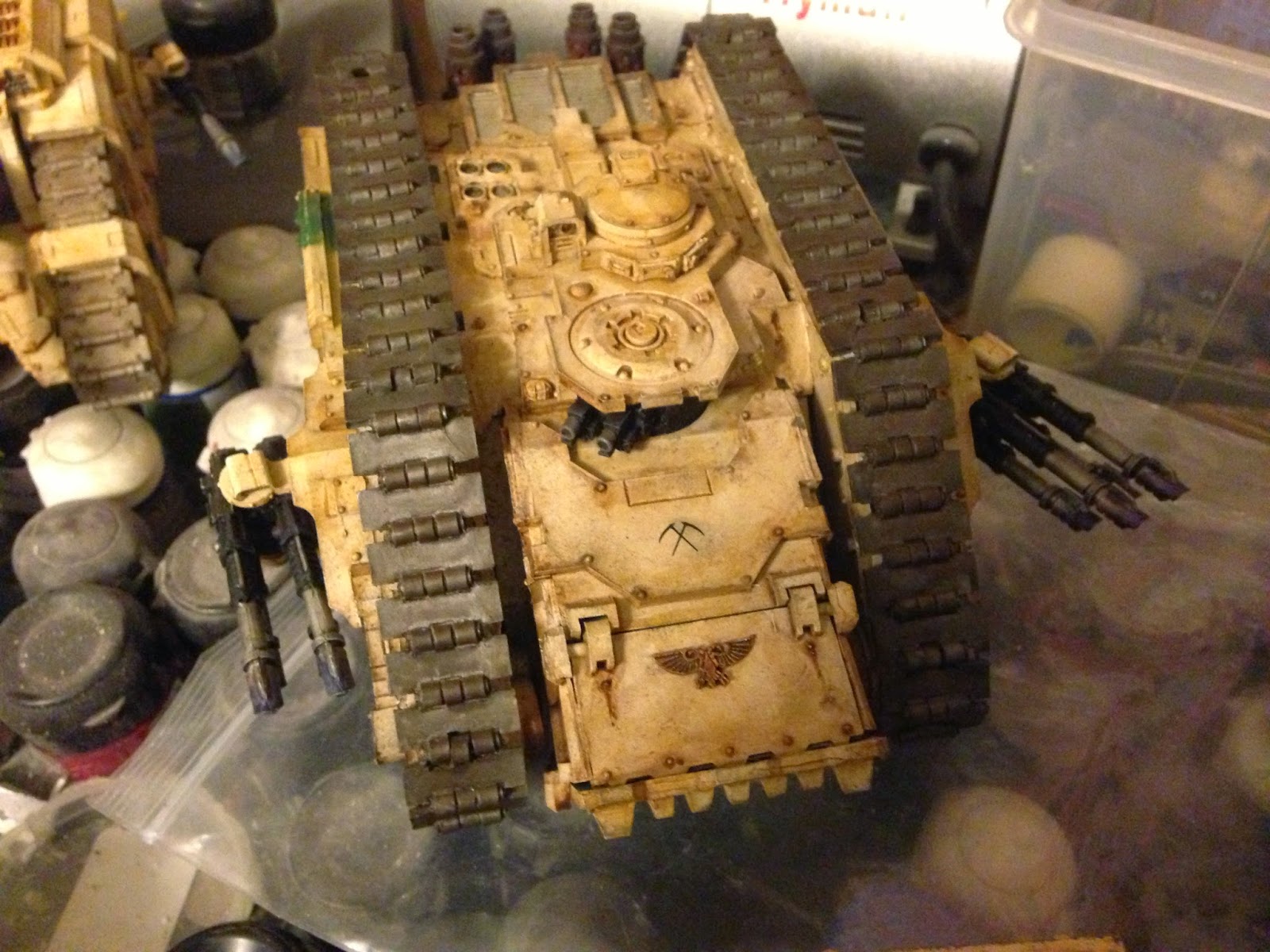 I'm really pleased i got these transfers, i was sitting on the fence for a while. not sure how much they'll be on the tabel top though....:-)

I'm so nearly there with the Avenger. my problem at the moment is that i have to many models on the go at the moment...sadly the Avenger hasn't been recieving the bulk of the attention!

So this is where he's at right now (sorry for the poor pic) Went with a grey base colour because i thought a model this big would look a bit much all in red! The red stripes down the wings and the brass cockpit are my hommage to the Mechanicum.

Colours and washes are down, so its just a bit of light weathering now. 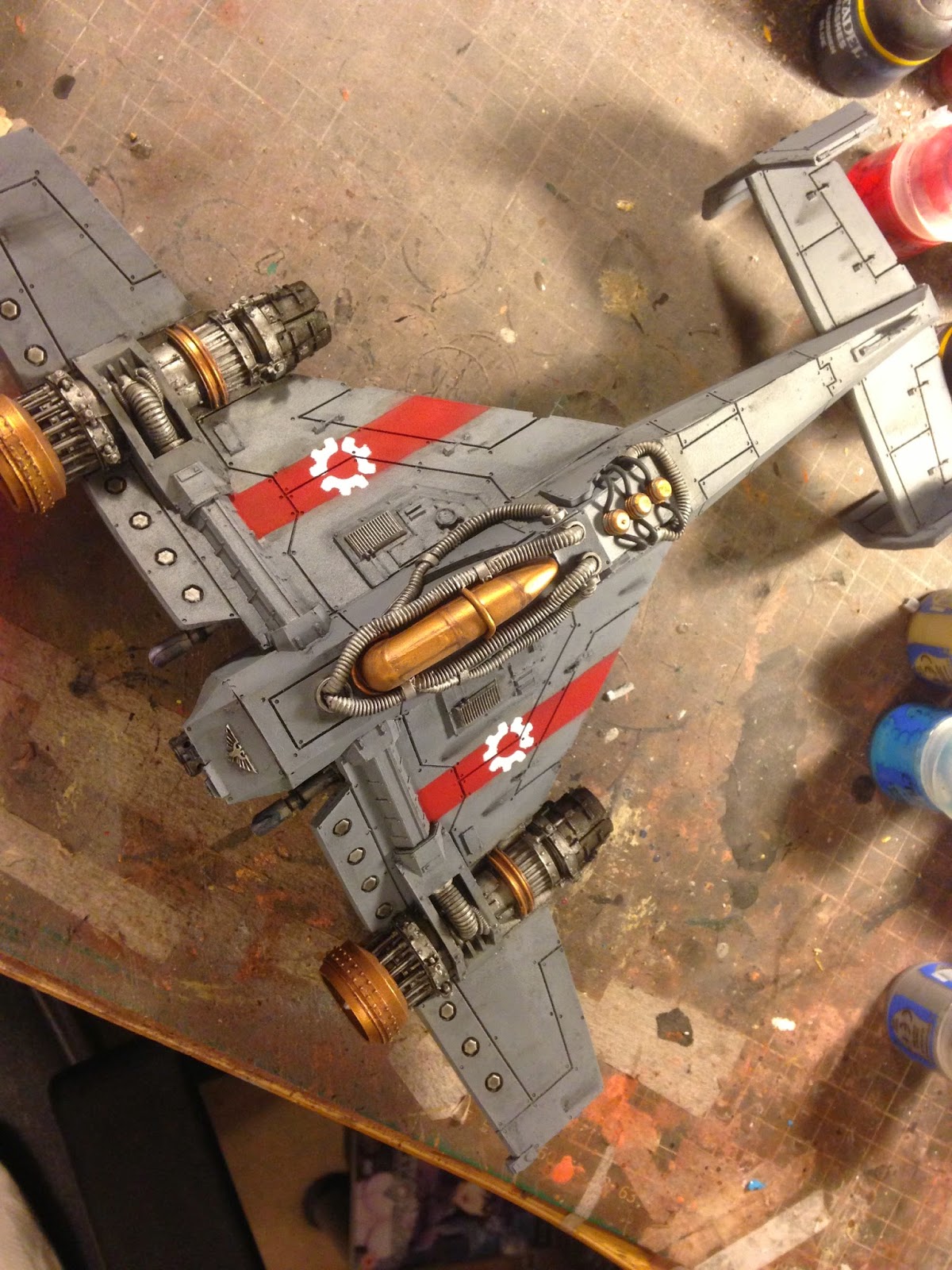 The cogs on the wings wern't planned! I did want something to make the Avenger pop a bit, but when a random trip to HabbyCraft turned up these stensils i was sold!! I knew i had to have them for my mechanicum. I'm sure they'll see a lot more use in the months to come! 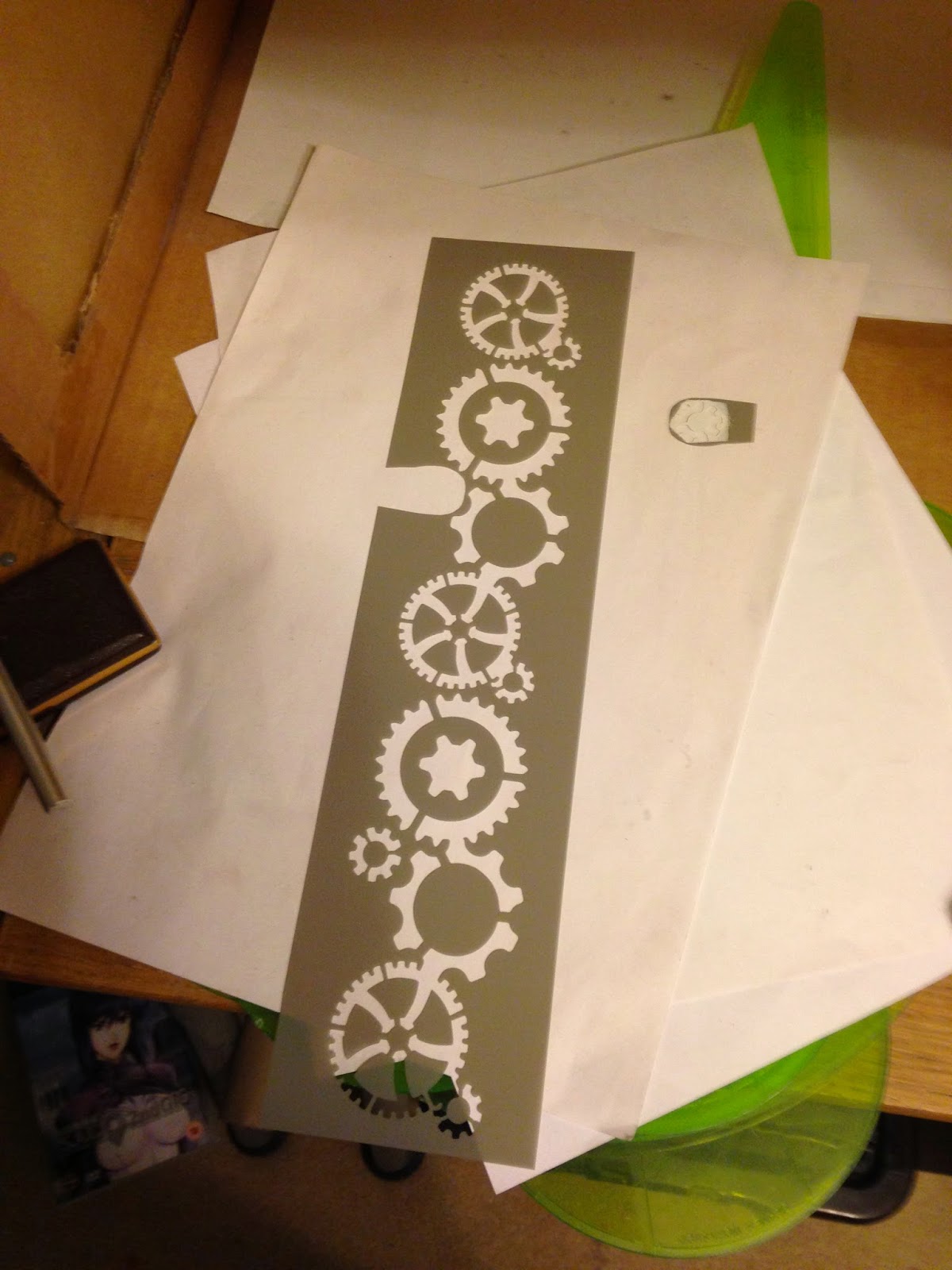