The day had finally come! I missed the boat on the Kickstarter for Dropfleet so had been keeping my eye on it ever since. I was stoked to see it in Hawk Wargames online shop (again a bit late to that party i suspect) so ordered it straight away! I had it before the week was out. 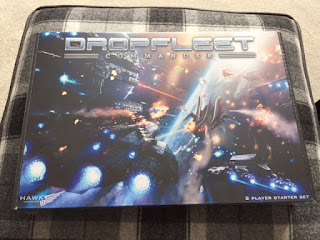 I did want to do an 'unboxing'post, but i'm afraid my excitment got the better of  me and i went to work on the ships straight away! I started with the Frigates.

There were 4 Frigates in the box which contained the starter fleets for UCM and the Scourge. The quaity is excellent and included plenty of detail. There are 5 different configurations for the UCM frigates on the sprue, and i was keen to take advantage of them all. 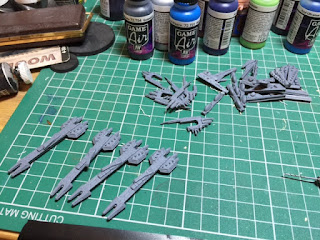 A lot of the parts for the Frigates slot and click together so snugly that no glue is needed making the options interchangable. I'm not sure if this was intended, but either way it works well! Here you can see the spines of the Frigates which are also interchangeable depending on what variant you want to run. 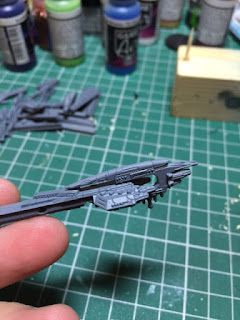 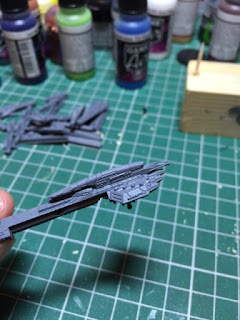 (the hole in the side of the hull was drilled initially for magnets, which i found i didn't need) 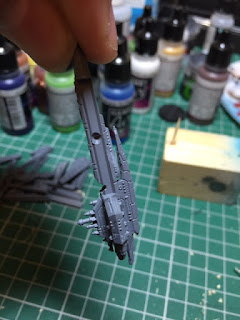 The sides of the ship are the same, cllicking in nicely to the main hull. 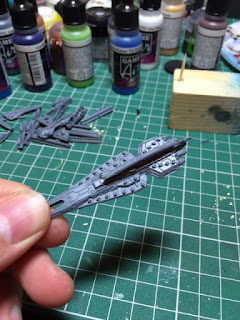 Although there is tones of detail on the Frigates, they are quite small, especially when your used to painting 28mm figures! I would need a way to mount and paint them. Toothpicks are your friend here! I drilled some holes into some wod blocks and glued toothpicks into them. 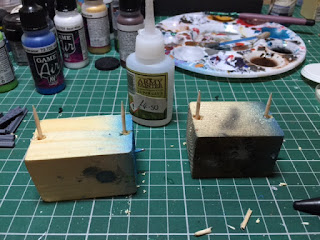 I drilled a small hole into the rear of the frigates and mounted them on the toothpicks. The holes in the hulls would be covered by the spines when assembled, so they wouldn't be seen. 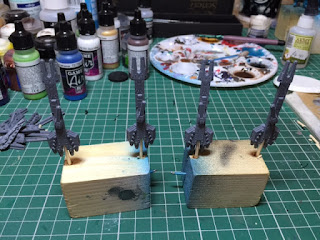 I did the same for the sides of the Frigates! This bit takes a bit of time to do, but you get it back when painting. 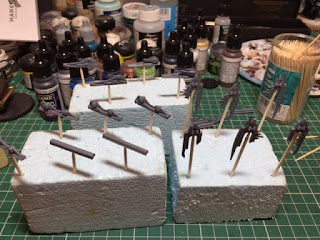 I painted up two of the hulls to get a feel for the scheme. I was going roughly for the box art scheme for the UCM. 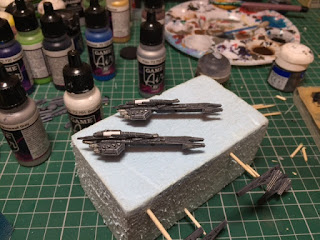 I did have a change of heart afterwards though, and tried another scheme with a more bluey-grey basecoat. I went back to the origional scheme afterwards though! Sometimes you just need to scratch that itch. 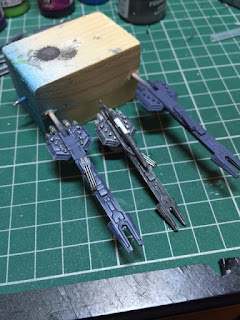 Its great to be this excited about a game and the minis again! I havent even read the rules yet! ore on this very soon!
The GunGrave

The completion of Machaon brings my first incarnation of my Steel Phalanx force to a very close completion. I have to say, this has got to be in the top 3 models that i've enjoyed painting! I feel like i made a few 'painting leaps' when painting this model. I feel like i was able to push the contrast beyond my usual limit which has helped make the details and shades pop more. Let me know what you think! 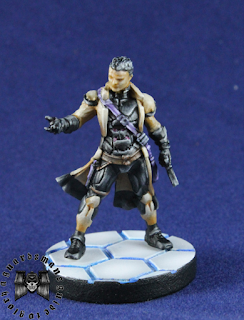 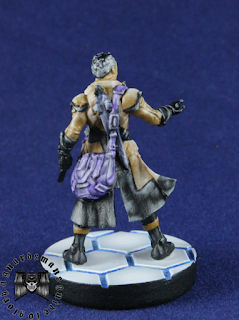 The latest addition to the forces of the Hydra! I set about working on this guy quickly after the last WIP post. As Skorr was an event only model i've had him laying around for some time (Horus Herey Weekender 2015 i think...) Now i'm building the Alpha Legion force, i could finally bust him out and get him painted.

Like the Dreadnought, i tried to better shade the metalics on this model without killing the tone of the pearlescent Teal armour. I tried out oil washes on Skorr, something i've used extensively in the past on my vehicles. I used some Burnt Umber wash on the golds, and some Lamp black on the metalics. I also gave the teal armour a pass with ther lamp black to try and deepen the shadows. Did it work? I'll let you decide! 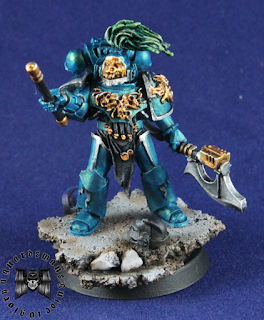 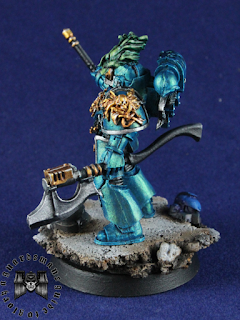 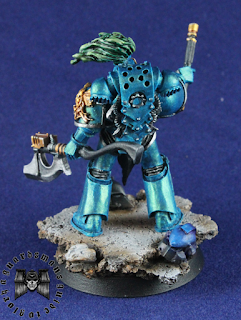 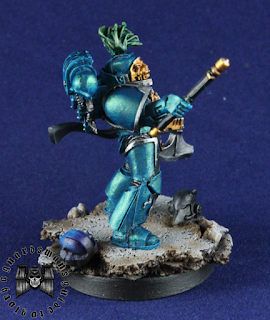 Skorr is also known as the Hydra's Headsman. While i was doing the base i thought i would hint at this by adding a few helmets to the base, some of Skorrs latest victims! I stopped short of adding blood splatter and gore - its not a World Eater model!! 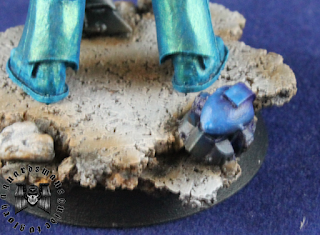 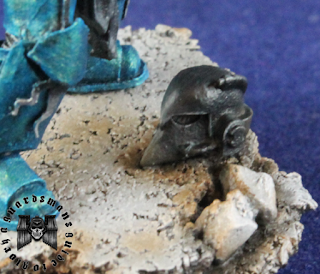 The detailing on Skorr really makes him pop and stand out. Lots of imagry of death with snakes and hyrda's coiling around it, brilliant! 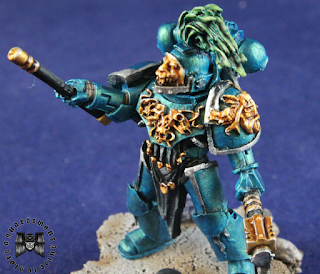 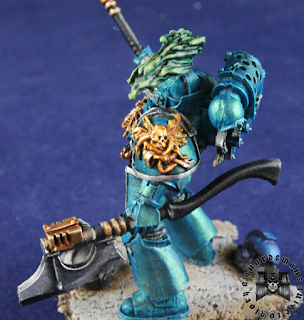 So i have a frustrating amount of un- finished mini's at the moment, but i do have a few things linned up!

Mr Alpha Legion himself, Armillus Dynat! I have to admit, positioning his arms was a huge pain! I'm looking forward to working on him. But first... 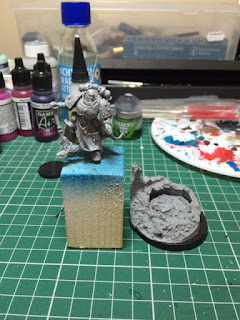 Autilon Skorr! The Alpha Legions headsman is next on the painting block to give me a suitable warm up for Dynat. I'm planning to mess around a bit with oil paints on this mini, mainly to try and enhance the shadding against the two tone paint i use on the Alpha's. 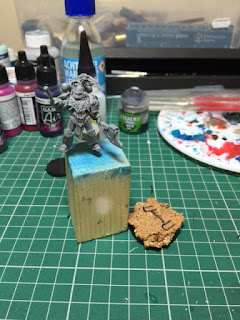 Less of a WIP but more of a 'just need to buy some bases'! This is another Infinity Myrmidon with Chain Rifle for my budding Aleph Steel Phalanx force. 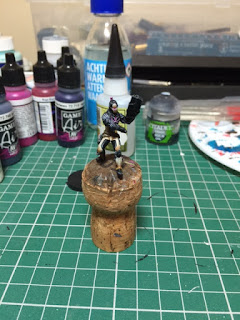 Machaon is also completed and destined for service in the Steel Phalanx! Once i get my bases from Antenocitis Workshop i'll get them finihsed off properly and better pictures taken. 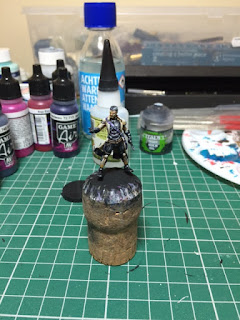 In other news i've bought myself a copy of Dropfleet commander from the awesome Hawk Wargames! I've had my eye on this game for a very long time (didn't get on the kickstarter bandwagon unfortunately) and now finally had a chance to pick up a copy. I'll be doing an unboxing a review of it when it arrives, hopefully this week. 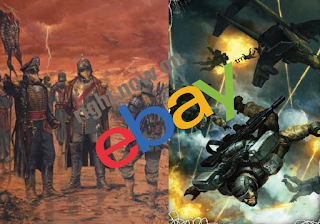 Yes thats right, i'm selling off my Imperial Guard collection after the best part of a decades service. Its a sad day, but real life dictates that money must be raised - even if some may be sneakily diverted towards other projects!

So we have my Death Korps of Krieg army up for sale as well as my Elysian Drop Troops. All listings can be found

The Vostroyan Firstborn will also be up in about 2 weeks time.