Hobby Atrophy - is This the cure?

So.....its been a busy 2 months, just not on the hobby front. Ive moved house - AGAIN! I was asked if id like to head up the renal unit in Worcester, so said 'why the hell not'! By that time id finished setting up the dialysis unit in Llandrindod Wells so needed a new project. So i moved lock-stock-and barrel to a nice new apartment on the Marina!﻿
﻿
New apartment means a new Forge - and here it is:﻿ 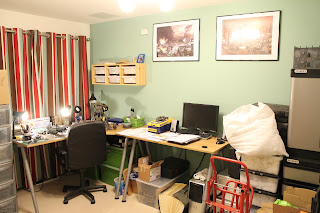 Same set up as the last one, just a new place really! The bad point is that it has cream carpets! That's gottta be a hobbyists worst nightmare.

I had to donate my Gothic Cathedral to my last gaming club as i now lack the garage to keep it. I did have enough space for the Hab Block and the Defence Laser (which i hope to get painted soon) 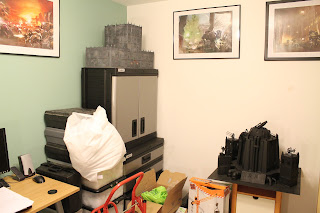 I invested in some additional storage for  my terrain pieces:﻿
﻿ 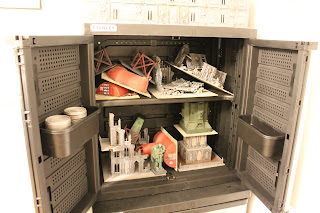 My babies are all unpacked and back on display:﻿ 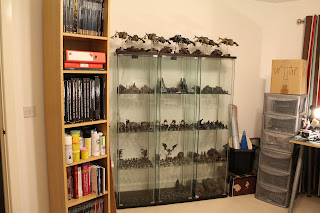 The Wolves have got a look in this time while Praetorian is out for repairs:
﻿ 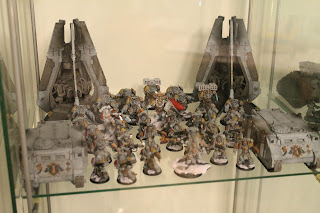 These are the casualties of the move! All of the Ghost Arks Gauss Flayers broke off (naturally) and all or Praetorian's limbs came off. Some work will be required, but it wont be to much of a problem. 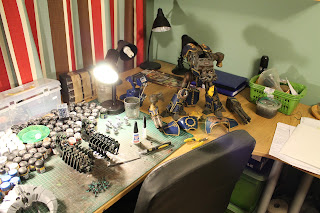 So whats next? I haven't played a game since February or picked up a paint brush in 9 months!! I'm in need of some serious inspiration. But i think my salvation is at hand.....
﻿ 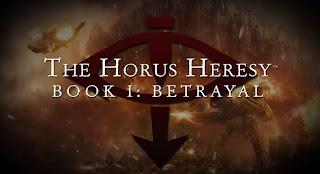 My copy of this came through the door the other day, and for £70, i was expecting great things. I wasn't disappointed. The book itself is gorgeous! The content is great and the illustrations impressive. The army lists inside are also interesting, but I've yet to put a list together.
The models that are being released for this series are FANTASTIC! Once I've decided on a Legion (which is a chore in itself!) I'll be getting a squad of Marines in Iron Armour, some Cataphractii Terminators and a Deimos Pattern Rhino! I'm hoping that will be the cure for my Hobby Atrophy!
The GunGrave
﻿
at November 23, 2012 9 comments: