Now I've had a good scratch of that Heresy itch, its time to get a bit  more Infinity done!
Next  up is my Myrmidon Hacker. I choose her as i'm playing around with some ideas for a Steel Phalanx force so i can finally take advantage of some link teams!! She will most likely find a spot on the roster. 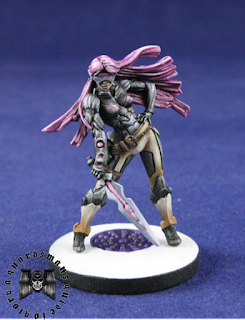 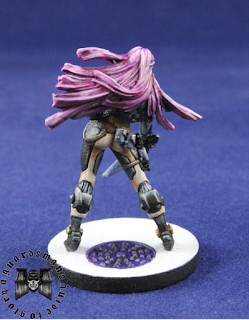 I want to let you all know about a new blog that i have become part of: Infinitus Bellum!

Its a collaborative hobby blog with myself and two of my war gaming buddies contributing. Over the next few weeks you'll find a tonne of great hobby content over a wide range of game systems. I (shamelessly) recommend it for your future reading pleasure!

The link is below, so make sure you check it out and add it to your blog rolls!

This bad boy is now complete, and i'm very happy with it! This is one of  the models I've been quite excited over for my Alpha Legion force, and it didn't disappoint. 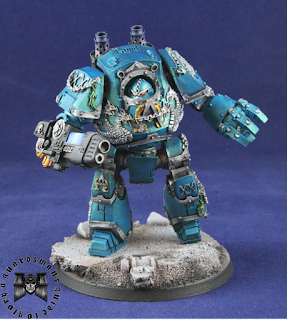 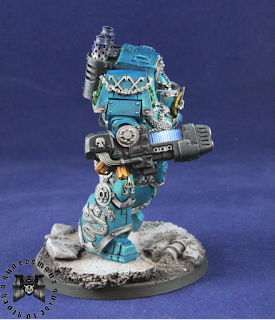 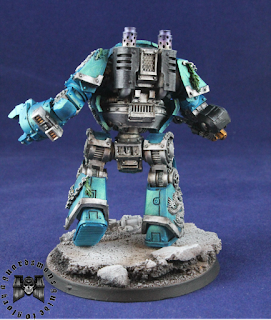 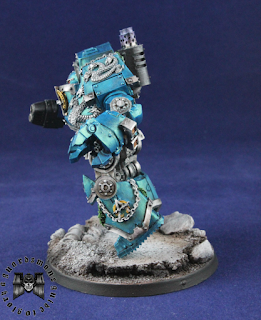 I tried to transfer some of the things I've learnt from painting Infinity, in this instance shading black. It was a bit different shading black on an area of this size (Infinity models are tiny!) but i think it worked, and it helped me look at the technique in a different way. 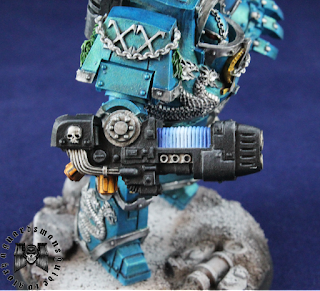 There's so much detail on this model, its one of the main reasons i like it so much! 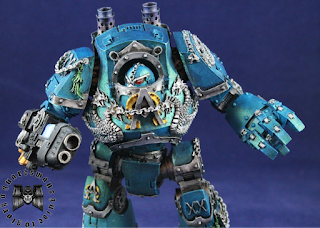 The Hydra's are just awesome! 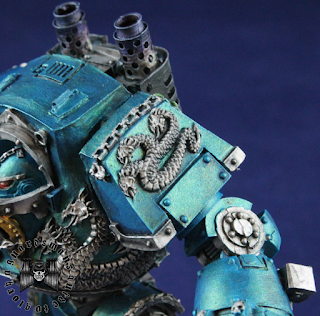 Another Infinity carry over i tried was shading the metallics a bit more. I pushed the contrast a bit with some dark Vallejo metallic grey (Gunmetal i think) to try and achieve a better level of shading. Some refinement needed i think, but pleased with the result on this model! 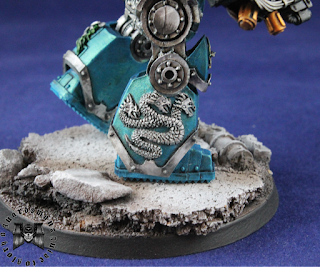 This was a cracking model to paint, and good looking to boot! Highly recommended!
The GunGrave
at March 24, 2017 8 comments:

Work is starting to progress nicely now i have found my Heresy muse again! Once the Tactical Squad was completed i immediately started putting together the Contemptor.
For me the Alpha Legion Contemptor is one of the nicest in the range. For me it is only matched by the recent Thousand Sons and Custodes Contemptors. So i have been quite excited about this model for a while. I went with the Plasma Cannon configuration with a Fist. I didn't magnetize the arms as i'm not playing Heresy at the moment (for nearly 2 years now!) so its not to important right now.
So I've hit the whole model with the two tone teal paint I've been using, picked out the metallic areas (there's a lot of metallic trim!!) and then washed the whole model with thinned asurmen blue. I'll be washing the metallic trims with Nuln Oil next then adding shades and slowly start bringing the colours back to life. 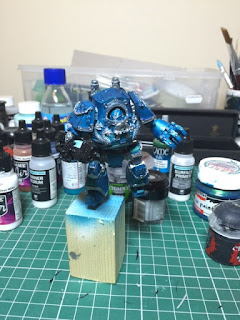 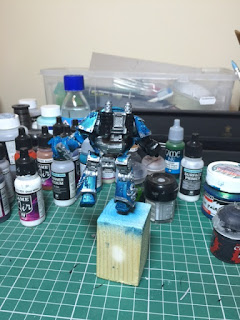 Between drying I decided to get the base done and out of the way. You may remember 2 posts ago i tried out a new basing technique by Third Eye Nuke studios. That attempt was an adaptation, but this one followed their tutorial. I am very pleased with the result, and the rest of the Alpha Legion will be following this basing recipe! 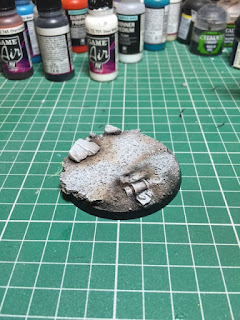 The base just had a few layers of cork added with a bit of the old citadel Urban Basing kit as well. 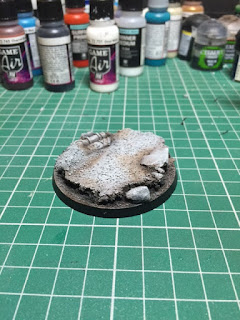 I also prepped the next 5 Tactical Marines while i had the airbrush out! I'm sure these guys will quickly follow the Contemptor. Maybe a squad of Scimitar Jet bikes after that! 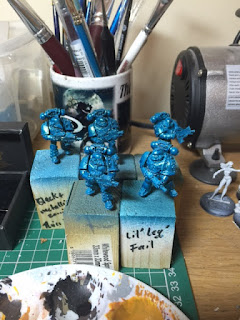 
Its been a long time coming, but the first Tactical Squad is now complete! My new found interest in Infinity has caused large delays in the progress of the Alpha Legion, but lately my interest has wondered back into Heresy. This has largely been down to the release of Inferno and the stunningly beautiful Custodes models (there are some plans in the pipeline for that, as well as a Custodes Knight!)

Before all that though the Hydra needs some love! The second set of 5 Marines is now complete and sporting the 'new look' urban bases from the last post.

This is one of two Tactical Squads planned for the Hydra.

While i had the mini's out i took the opportunity to take a family photo. 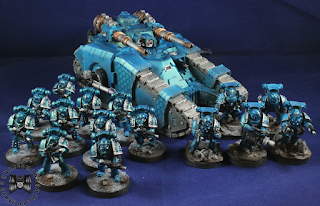 I'm keen to make more progress on the Alpha Legion soon, but as i mentioned in the last post, i want to try a new color scheme before i move on. Chances are i won't go for it, but i'll always be thinking 'what if...' if i don't! More on that soon.
The GunGrave
at March 14, 2017 6 comments:

Back to the Bases

Renovations on the house have kept me away from models and hobby in general for a few weeks. I have been thinking a lot about it though, more specifically my Heresy Alpha Legion.

Firstly I've been looking at alternative color schemes (more on that soon!) I'm not convinced i'll change the scheme, but i need to scratch that itch before i continue painting any more.

The other thing I've been pondering over is bases. I generally put a bit of effort into my bases, especially the larger ones. However, i kept looking at my Alpha Legion and thinking that something was missing. They were quite bland. I did a quick trawl of the internet to get some ideas and found a great tutorial from Third Eye Nuke Studios on how to paint urban bases. I highly recommend it! I couldn't replicate their tutorial completely (i'm waiting for spare parts for my airbrush) but i did try my best to do so using weathering powders.

Below is a Destroyer. I had used some weathering powder on the Destroyer bases, but they did little to make them more interesting. 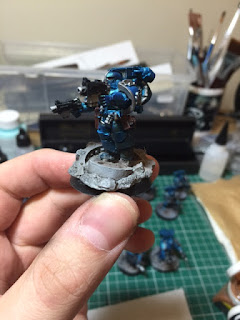 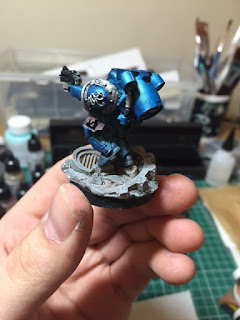 So what i did (using Third Eye Nukes ideas) was add some black weathering powder to the recesses of the base and anywhere i could achieve a good contrast between the powder and the grey of the base. Then i added some dark rust colored powder over the top of it (sometimes mixing the two before application) This is what the base looks like now: 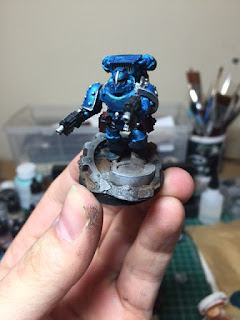 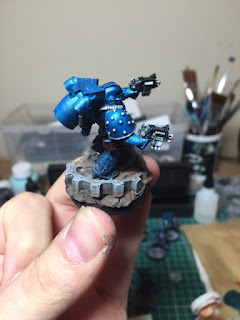 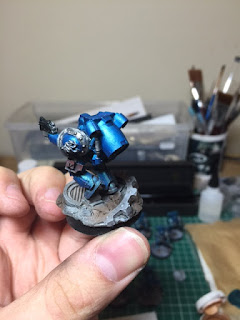 I think its a big improvement! Golden Daemon statues didn't start falling from the sky, but it just makes the base a lot more interesting and gave the overall appearance of the model more depth. I also took some proper photos in the light box so you could see the effect better. 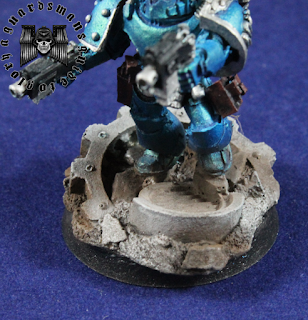 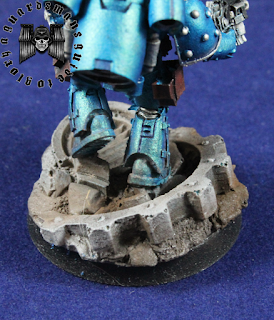 After thew Destroyers bases were 'treated' i moved onto the Tactical Marines i'd done. 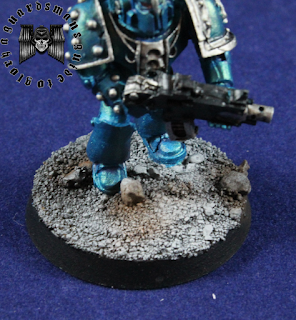 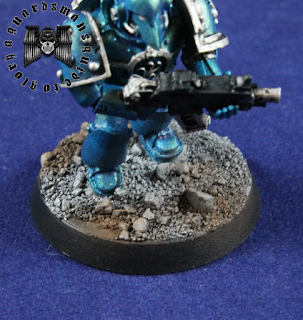 Again, mode depth and better contrast, making the base a bit more interesting! I'll be giving Third Eye Nukes technique a proper go once my airbrush is operational again. I'll let you know how it goes.

How do you do your bases? Do you have any good tricks that can supplement this method?