So as promised, here is a bit about the quality tournament i attended way back in September.

This was my first Infinity tournament, so i was a little apprehensive to say the least! I hadn't been playing Infinity for very long, and there were a pile of rules to remember! But my buddies Dave and Luke were adamant that the best way to learn the rules is to play in a tournament! So in i dived!

The tournament was to be held in Cheltenham by Incom Gaming. This wasn't a club i'd been to before, but i had heard of them. This was also their first Infinity tournament, so i wasn't quite sure what to expect. As it turned out, they did a spot on job! It was well organised with some pretty decent terrain to play on!

Sadly i was a bit engrossed so didn't manage to take many pictures. I did snap the tables before we started: 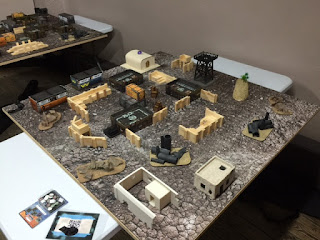 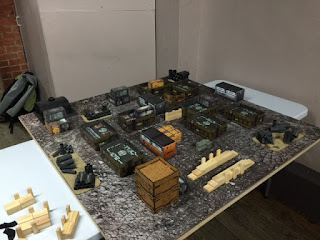 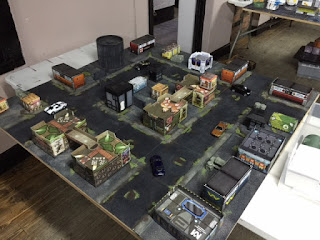 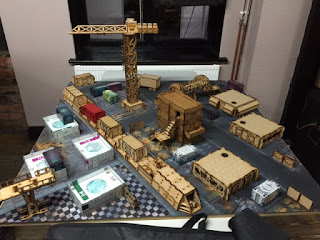 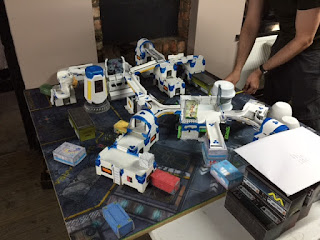 This was the table i played on for my second game, and i actually remembered to take some pictures! 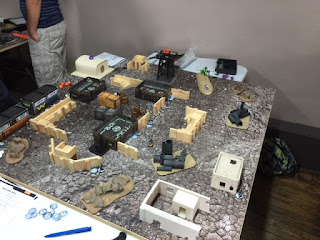 My blonde bombshell holding the right flank. She was devastating! 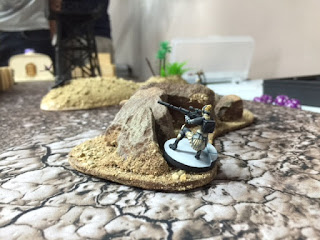 most of my force charged up the middle on turn one to secure the narrow doorway splitting the board. 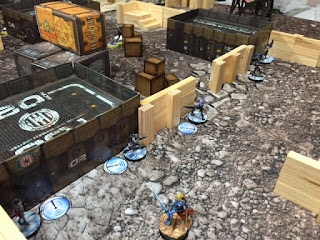 My other favorite MVP, Agema with missile Launcher, who held the left flank with a nice straight fire lane to practice hurling missiles down! 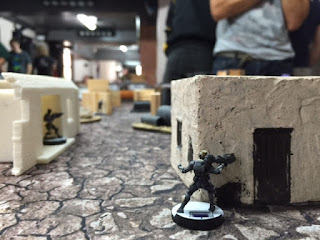 When it was all said and done i came out with a Win, a Loss and a Draw! Not bad for my first tourney!

I also entered the painting competition, which i was crowned winner! There wasn't a great deal of entries, but it was still nice to win! That's me with a paintbrush in my mouth, second from left on the bottom row, and my mate Luke who came overall second in the top right. My other mate Dave who was also there had a bit of a shocker i'm afraid... 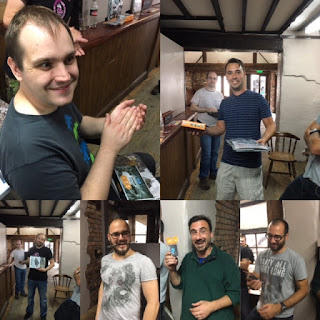 Overall a great tourney, and i'd definitely go again! Will be keeping an eye out for the next one!

Firstly i hope you all had a nice Christmas! It's really not my bag, but for those of you who do celebrate, Happy Christmas! Now to business...
Ah the lovely Atlanta! I've had my eye on her for a while! Lovely model, even more lovely rules! BS 17 with her TinBot spotter, packing a Multi Sniper and an MSV Lv2! Just like her missile launching comrade, she will happily hold a flank all on her own. She was definately my MVP in the Tournament i went to in Cheltenham in September - more on that next post! 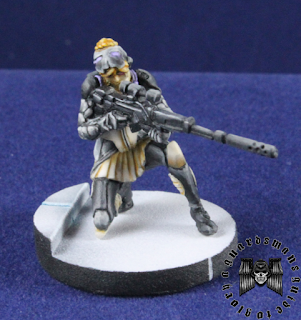 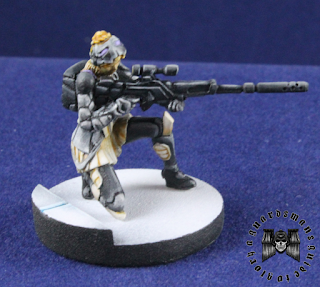 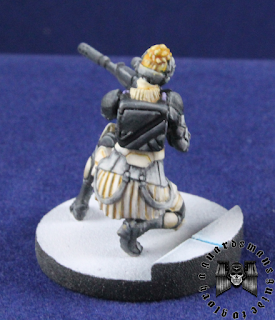 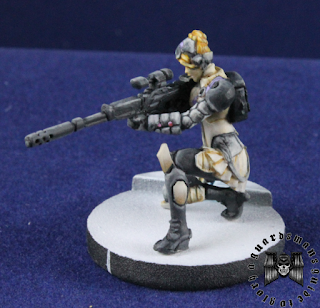 Asura's are great models and even better in game! I've had a lot of fun with my other Asura, so it was time to grab another but this time packing a little more heat with a Spitfire!
I really enjoyed painting this model, and i really live the sculpt! She really reminds me of Major Kusanagi off Ghost in the Shell fame! Problem with this mini is that it costs a fortune in points...worth it though! 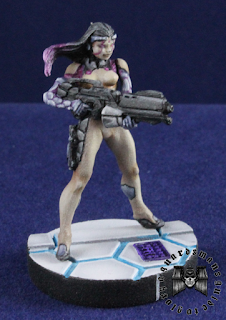 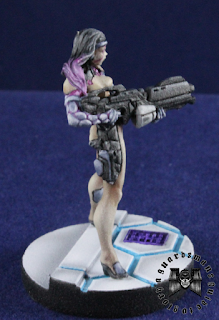 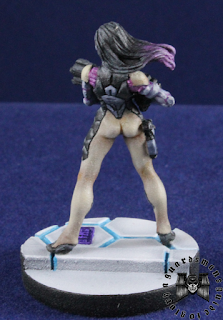 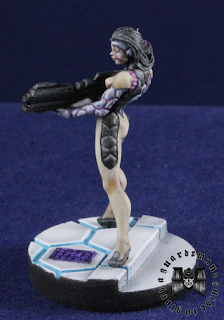 Another good performer for my Aleph force, the Agema with missile launcher.

The Launcher combined with MSV lv2 is a great combo, and when placed in cover, will make your enemy think twice about advancing up that flank! At least until they shift him!

Although i like the model itself, the pose does make it look like he has a hell of a belly underneath that amour! 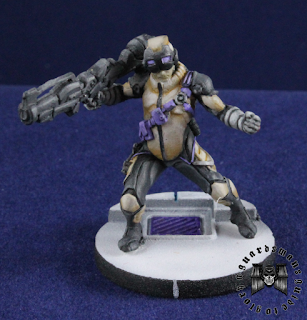 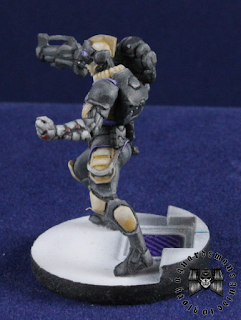 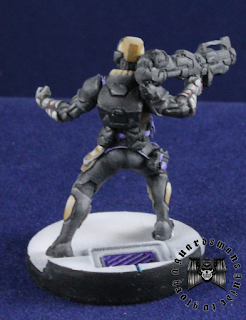 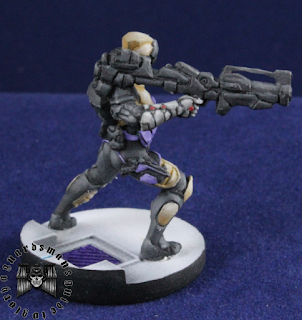 Hi again! as promised i have a shed load of Infinity models to share with you. A lot of these have been done for a while, mainly in preparation for my first Infinity tournament that was back in September (more on that soon)

So first up in a long line of Infinity posts is my Sophotects. For me an 'auto include' model for any Vanilla Alpeh force due to her Doctor/Engineer abilities. She's also pretty fast!! I've also painted up the Netroids that came with the Sophotects set. I still have the 2 Yudbots to paint up. 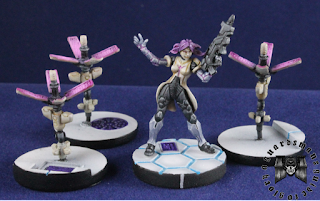 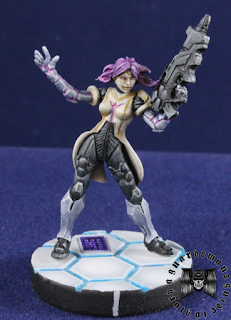 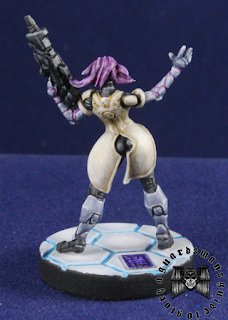 So far she's been performing pretty well! I won't be dropping her anytime soon!.

Return from the Grave!

Wow, its been so long I've had to dust off my keyboard to begin writing this! 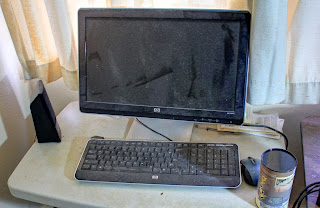 (Archive media - not GunGrave's actual computer...but pretty close!)
Just a quick one to say that i'm back online after a very busy few months, mainly with the new house, but also with lots of hobby goodness that i want to share with you all! A few of the highlights to come:

I'm also pleased to say that my 30K interest is slowly returning, mainly due to the Custodians and Sister of Silence release. I may even start to rummage through the boxes and paint some of them up. So what else has been happening?
Those are the broad strokes for now! I've got a load of hobby content coming up very soon.
The GunGrave
at December 08, 2016 12 comments: